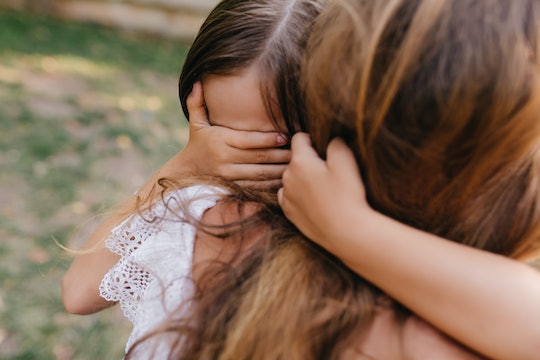 We Need to Talk About Maternal Suicide

New moms need more support. A study published in the American Journal of Obstetrics and Gynecology (AJOG) in June found that suicide and drug-related deaths are among the top causes of death for new moms. Looking at over one million women who had children at California hospitals over a two-year period, the researchers found that 300 women died in that time after birth, and that suicides and drug overdoses caused close to 20% of these deaths.

Study author Sidra Goldman-Mellor, who serves as an assistant professor of public health at the University of California-Merced, tells Romper that she and her co-author were "surprised by the magnitude of the results."

"We thought that drug-related and suicide deaths might be common, but we didn't expect them to be so high-ranking as causes of death," Goldman-Mellor says in an email conversation.

The figures are alarming, even though we know the U.S. has the highest maternal death rate of all developed countries. Calls to reform maternal healthcare have largely ignored the issue of maternal suicide, though a 2013 study published in the Journal of the American Medical Association described suicide as the second-leading cause of death for mothers.

We thought that drug-related and suicide deaths might be common, but we didn't expect them to be so high-ranking as causes of death.

The 2019 AJOG study found that close to 75% of moms who died by suicide or overdose had gone to the hospital or used an emergency department service after birth.

"Many women may be slipping through the cracks and not getting the care they need during the postpartum period," says Goldman-Mellor, noting the inadequacy of the six-week checkup as a screening mechanism. She says the remedies lie in expanding maternal healthcare coverage through the postpartum period, addressing substance abuse, and tackling stigma around, and a lack of resources for, mental health issues.

"If these providers are not sitting down with each patient for two minutes, looking her in the eyes, and discussing [perinatal mood and anxiety disorders] terminology openly and straightforwardly — they have no idea how their patient is really feeling, regardless of what she marked on her screening tool," says Karen Kleiman, the author most recently of Good Moms Have Scary Thoughts, and founder of the Postpartum Stress Center, in an email conversation with Romper.

"Every single pregnant and postpartum woman walking into a provider’s office is potentially suicidal," says Kleiman (emphasis hers), who works with the nonprofit 2020 Mom, which recently launched a campaign to coincide with Suicide Prevention Awareness Month. "If the right questions are not asked, or if the right tone is not used, if the patient feels unheard or uncared for, the provider will have no idea if this woman is having thoughts of harming herself or not."

What Should Doctors Be Doing For New Moms?

Kleiman says every healthcare provider should always have an updated list of reliable maternal mental health resources to give to pregnant and postpartum women, and should discuss "the potential for prenatal and postpartum depression and anxiety with the same authority with which they discuss annual mammograms."

Dr. Jennifer Rhodes, a reproductive psychiatrist treating patients at the Postpartum Wellness Center of Boulder in Colorado, tells Romper that it's important to not only ask about feelings of hopelessness a new mother may have, but about "the full gamut of hopelessness, fantasies of escape, fantasies of not being here, not waking up again, all the way to, have you ever thought about ways in which you would harm yourself, or ways in which you would end your life?"

"When you talk to women about their sense of wanting to end their life, for many women, that's a very upsetting thought and then they say, 'You know, I don't want to die, I'd never hurt myself because of my children, but I have these thoughts,'" Rhodes says. "That's obviously less concerning to hear."

What Is The Cause Of Severe PMADs?

Rhodes says a host of different factors can increase a woman's chances of suffering from a perinatal mood and anxiety disorder (PMAD). Dr. Rhodes says that the psychiatric interview she conducts for new moms looks at the level of support a woman has in her life, whether or not she's getting enough sleep, the health of the baby, the difficulty of the pregnancy, and whether or not there is a history of pregnancy loss.

Risk factors include a genetic predisposition, and history of mood or anxiety disorders, along with other stressers: "single versus marital status or partner, socioeconomic class, drugs and alcohol, whether your baby was in the NICU." While the population experiences postpartum depression at a rate of around 15%, the rate of postpartum depression for women of color may be as high as 38%, per a 2012 Maternal and Child Health Journal study.

But Rhodes acknowledges that not all women have the opportunity to see a psychiatrist for a postpartum evaluation, and don't get an in-depth screening of their mental health state at the hospital after birth.

"The people who are seeing these women first are not psychiatrists [and] are not mental health providers, they are the people who are delivering the babies, the nurses in the room, maybe lactation consultants or pediatricians at the first week appointment," Rhodes explains, and the lack of infrastructure extends to home. "Having a baby is very isolating," she says, and the fix for that is, in part, support groups for moms, assistance with baby care, and paid leave from work.

The U.S. is the only developed country that doesn't require paid time off for maternity leave. Childcare costs can be so expensive that it's cheaper for some households to simply have just one working parent, and most new moms don't have a "village" of relatives nearby to help out.

Kleiman says it's important to recognize that postpartum depression can hit moms at any time within the first year after birth, and that it "doesn’t occur according to anyone’s schedule or expectation." She adds that signs a woman might be in severe trouble can easily fly under the radar, and emerge more than a year after birth.

How To Identify Warning Signs

"Symptoms of self-harm and suicidality are a leading cause of illness and death for postpartum women," says Kleiman. "While it may seem, to an untrained professional, that evidence of severe symptoms would be clinically obvious, symptoms often go unnoticed and can remain masterfully hidden by new mothers hoping to conceal her suffering."

Subtle references can be the biggest red flags, as moms who are suffering tend to work very hard not to disclose the extent of their inner turmoil.

"She may be paralyzed by her thoughts," Kleiman says. "She may experience and express unrelenting hopelessness. She may not want to be alone with her baby. She may isolate herself from others and reject any attempt to help her. She may shut down and disconnect from previous relationships and activities. Her mood and affect may be off, meaning, she may not seem or feel like herself."

Partners and loved ones are sometimes able to help identify issues and get help. But even getting out of the house for a moms' group meeting can be daunting, which can lead to even more feelings of isolation and failure for moms who are suffering, Kleiman says. "Many new moms struggle with impaired sense of self-worth and confidence during the first postpartum months. Often, efforts to seek support can backfire and actually increase vulnerability as well as their risk for depression, such as engaging with social media or joining groups that ultimately lead to comparisons or competitive, unrealistic expectations."

Of those who do initiate treatment, a 2011 paper in Psychiatric Services found Black and Latina mothers were less likely to receive followup care.

How To Prepare For The Postpartum Period

Kleiman and 2020 Mom present four recommendations for moms concerned about the postpartum period:

If you have a history of mental health disorders, for example, understand your risk factors beforehand so you can have a plan for the postpartum period.

"If you have previously been on medication that has helped you in the past, it may be helpful again, so this should be discussed with your healthcare provider, as part of the postpartum plan, prior to the emergence of any symptoms," Kleiman says.

Connecting with your partner, if you have one, is also important during this time, according to Kleiman. Though asking for help can be difficult, Kleiman wants women to know that it's OK to struggle postpartum, and that they are not in this alone. Author Kate Rope recommends creating a Postpartum Pact during pregnancy with a trusted family member or friend who agrees to listen to any concern without judgement.

The World Health Organization reports that 10% of all pregnant women and 13% of all new moms will experience mental health issues, but that basic resources and awareness can make a difference: "Effective interventions can be delivered even by well-trained non-specialist health providers."

"Understand that you may not feel well for a while," Kleiman says. "This is OK. But it is not OK to suffer with distress that interferes with your ability to function or get through the day. Find a safe place to talk about how you are feeling. Let your partner know when you need help. Let your healthcare provider know how you are feeling. If you are worried about the way you feel, do not presume this will go away on its own. Do not let feelings of shame or guilt get in the way of seeking professional help."

More Like This
41 Strong & Sweet Baby Boy Names That Start With “K”
Is It Good For Babies To Be Exposed To Germs? It’s Complicated
My Fertility Journey Began In A Cold Doctor’s Office, But It Was Also Weirdly Romantic
25 Instagram Captions To Honor Your Preemie Baby’s Journey