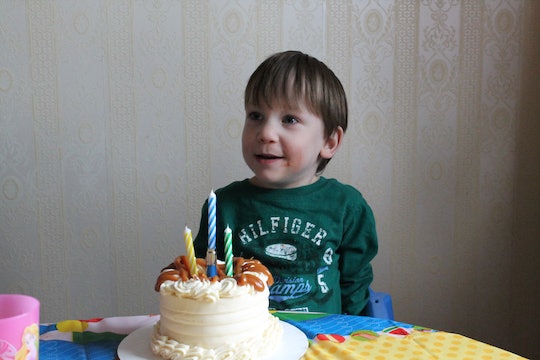 We Need To Talk More About "Parenting Fails," Because They Happen To All Of Us

A couple of months ago, my toddler son made a run for it. My energetic, crazy, determined 3 year old literally walked out the front door of my own house when I wasn’t paying attention, and the only reason I even knew was because a neighbor across the street I’d never even met before spotted him and rushed over. Admitting this publicly is embarrassing — shameful, even. What kind of mother doesn’t even notice her kid has walked out the door? I haven’t even let myself think about it much since it happened, because all of the horrific what-if scenarios that could have occurred as a result of my cluelessness are completely soul crushing. And yet, I need to talk about it. We need to talk about it. Mothers and fathers and caregivers everywhere need to be talking about our embarrassing, shameful close calls with our children, because the one thing I know now that I had no idea about before is that they happen to everyone. We just choose not to share those stories with the world.

On the evening of my son’s "escape," I was home with my twins when my husband came home early from work. He’d gone upstairs to change and left the front door open for some fresh air (as we often do) but locked the screen door. I was busy in the kitchen with my daughter when our dog, Penny, started barking like crazy at the front door, so I went to go shush her (nine times out of 10 she’s just spotted a squirrel, or maybe her own reflection), but as I was doing so, I saw a woman in a bathrobe and pajamas walking up our driveway. She was saying something I couldn’t quite make out and pointing a few houses down, and I thought maybe it was about my elderly neighbor, June, who’d had a fall a few days earlier — only she wasn’t talking about June. She was asking me if the little boy walking down the street in bare feet and a diaper was my son.

I can still remember feeling my brain piecing the details together one by one: This woman is your neighbor. She is not talking about June. The screen door wasn’t locked. Reid is outside alone. Your child is outside alone.

What if I hadn’t brought it up to my online friends? What if I’d been too ashamed, like I’m sure a lot of people are? How many parents are berating themselves, not realizing that these common parenting close calls are honest mistakes, and that they don’t make them terrible parents?

In an instant, I ran. I left my dog and my daughter and my husband and I ran, barefoot, down the street as fast as I could, screaming my son’s name. And as I ran, my brain envisioned all the awful ways this would end: I’d find him hit by a car maybe, or I wouldn’t find him at all. I yelled his name even though I knew he never ever bothers to respond when I do that, because he’s 3 and thinks it’s funny, and I prayed that he just ran to Mary and Dave’s house next door, or maybe June’s house next to that, like he does sometimes when we’re playing outside. Even then, every time he'd do that I'd tell him, “Reid, you cannot hide like that, I need to know where you are. It’s not safe." I'd do it knowing that he doesn’t really understand; knowing that he’ll probably keep hiding without realizing why he shouldn't.

While the worst scenarios took root and played out in my head, I found Reid. He was two houses over, standing at June’s door. My heart was racing, and my head was spinning, but naturally Reid was standing there oblivious, just hoping that we could go visit our neighbor like we often do.

“Is he there?!” my neighbor in the bathrobe yelled.

Until that moment, I literally thought I was the only mother in the history of the world who could've made such a stupid mistake. It never occurred to me that other people I respect and consider to be great parents could also have stories really similar to mine.

When I brought my son back to our house, my husband was waiting, worried, at the front door. I choked out a few words, trying to explain, but I felt so guilty and terrible and horrified that I could barely get anything out through my tears. All I could think about was how busy our street gets in the evening, how many cars always whiz by; how easily Reid could have ran out in front of one because he still doesn’t really understand why it is that we have to look both ways before we cross the road and always hold hands in parking lots; how terribly, awfully this could have all ended; how, in a split second, my boy could have been taken from me.

My husband tried to reassure me by telling me that things we OK, our son was fine, that nothing actually happened. But that didn’t feel comforting in the slightest, and suddenly my head was pounding, so I told him I needed to lie down. I went up to bed feeling crushed with guilt and I wanted to talk to someone — anyone — who could say something that might help. So I went online, to a Facebook group full of writer friends with kids who are always so supportive, and I told them what had happened. I don’t know what I was really expecting them to say exactly, but when the responses started coming in, I was really, really surprised:

My son ran outside wearing only pants in 40 degree weather, and I had no idea until a neighbor walking her dog spotted him and brought him inside.

I was watching my kids play in the yard once, and I turned my back for what felt like two seconds and found my son at the end of the driveway on our super busy street.

My toddler got outside when I was talking a quick shower. He literally climbed out of his playpen and managed to unlock and open the front door. It was terrifying.

Reading these comments (and there were many more!) was both incredibly reassuring and totally eye-opening. Until that moment, I literally thought I was the only mother in the history of the world who could've made such a stupid mistake. It never occurred to me that other people I respect and consider to be great parents could also have stories really similar to mine.

Then I got to thinking: Why the hell aren’t we talking about this stuff?

I’m still shaken up about what happened to my son, and I’m definitely more paranoid know about locking doors and knowing exactly where my kids are at all times just in case. But I also know now that this kind of stuff happens, for better or for worse, because kids do dumb, scary stuff without realizing, and because we are all human beings who make mistakes sometimes. My husband was right that day: Reid was safe, and everything was OK, and I didn’t have to be reacting as severely as I was. But that wasn’t what I needed to hear.

What I needed to hear was, “it’s not your fault, it happens, and I know that because I went through it too” — and I am so grateful that I was able to get that. But what if I hadn’t brought it up to my online friends? What if I’d been too ashamed, like I’m sure a lot of people are? How many parents are berating themselves, not realizing that these common parenting close calls are honest mistakes, and that they don’t make them terrible parents?

Because of this, I’m sharing my story, putting it all out there to let anyone else who needs to hear it know that they aren’t the only one who's had a scary moment, and that they’re common — way more common than we’d ever think. Parenting is hard, and we’re all just trying our best. Mistakes happen. And as scary as it is to think about, we have to help one another accept that that’s OK.