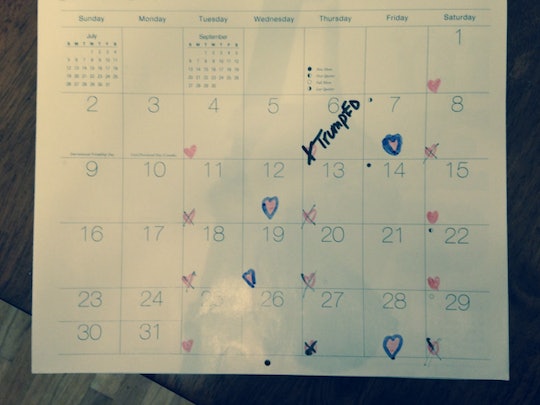 We Scheduled Sex For A Month, & These Were The Results

My husband and I have been married for six years and are deeply in love, but lately the steamiest thing happening in our bedroom is when I turn on the humidifier to help with our allergies. Between our jobs, half-marathon training, laundry, cleaning, caring for our twin 2-year-olds, and remembering to change the litter box, we haven't had sex as frequently. Sometimes it feels like it's fallen to the very bottom of our to-do list. It’s not that we don’t want to get our freak on, it’s just that when the kids are finally asleep, the siren call of Netflix wins out more often than it should. And next thing you know, we can’t remember the last time we saw another naked adult who wasn’t on Game of Thrones.

I miss more than just the physical pleasure of sex during the dry spells. When things are going well between the sheets, I feel more connected to my husband. I’m more patient and forgiving over little things, like leaving wet towels on the floor. We talk to each other more and are more affectionate overall.

Lately there have been too many “goodnights” and not enough nightcaps in the master bedroom, so we decided to try something radical. Rather than wait for the mood to strike, we made the choice to treat sex like one more appointment in our daybook to see if it brought us closer together.

1. We would do the deed three times a week on Tuesdays, Thursdays, and Saturdays. If the mood struck at any other time, we’d go for it, but those rendezvous wouldn’t count towards our weekly quota.

2. We were each allowed one “nope” card during the month that could be used, no questions asked.

3. Being interrupted by a child mid-mojo still counted, even if we hadn’t achieved lift-off.

4. Illness, like one of my migraines or whatever nasty bug our kids were carrying, also gave us permission to cuddle instead.

We were off to a great start, both eager to remind each other of the hearts marked on the calendar, and raced each other to check off our progress the next morning. But Thursday lined up with the GOP debate, and while yelling at the television together got our blood pumping, by the time we were done, it was late and we mutually agreed we were too tired for anymore physical activity. But unlike other nights when we fall asleep sans sex, I didn’t feel sad or worried about our relationship. I wasn’t sure if it was because we’d just had sex a few days ago or if the act of having an adult discussion about something we are passionate about was just giving me the warm fuzzies. I suspect it was the latter.

Taking the time to talk to each other rather than watch a show together in silence gave me the same post-sex afterglow and made me realize that we need to carve out more time for each other that doesn't involve screen time. My husband agreed that even though we were deciding to skip out on the sex that night, he felt closer to me because we’d spent so much time talking that night. The following night though, he was all, how you doing?, and I was picking up what he was throwing down.

We fell off track again when a closet renovation got in the way of our sex-life renovation. With two toddlers under foot, the only time to do our home renovation work is while the kids are sleeping, and it was pretty late by the time we finished. Although we missed the mark on three sheet sessions, neither of us were upset by it.

Again, it felt different than the other times we skipped out on having sex. We were actually talking about our sex life and expressing a desire for it even though were too tired. Usually we just ignore the elephant in the room, but thanks to this experiment we were more willing to communicate with each other. It felt good to know we still were attracted to each other. So even we simply ran out of hours in the day, I’m still counting the week as a win.

I asked my husband if he was disappointed the few times we hadn't had sex as scheduled. Because men and women view sex differently, I was curious if he was put-off by the lack of putting out. He said he was still pleased because we were having it more often than we had been prior to starting the experiment. Plus, he was happy that we were talking more openly about our wants and needs, so he didn’t feel like he was starting a fight if he brought up the topic of sex.

My husband is a big fan of theme parks and the annual Disney World theme park convention (where they unveiled future plans for the parks), fell smack during week three. It was a doozy of an announcement, and because my husband is in a strong online community of fellow nerds, he spent the entire weekend online talking about the future of Mickey and Minnie’s playground.

Even though I reminded him we were on a sex schedule, nothing was as exciting as his iPad. I thought I could get his attention and have some fun with sex, but I’m too shy to do a legitimate strip tease, so I played it coy. I started prancing around practically naked in front of him under the guise of asking him to check for suspicious looking moles hoping he would take the hint and still, crickets. If I had a set of Minnie ears and some polka dot panties maybe I could have pulled it off, but it obviously wasn’t happening.

My husband looked over the top of his computer a few times to wolf-whistle and made a joke that I could “have my way with him” if I wanted to, but I had a sneaking suspicion he didn’t plan on putting down the iPad, and I’m not really one for threesomes.

While I was a little miffed because, experiment aside, I actually wanted to have The Sex, I’m glad he didn’t want to because it taught me an important lesson: I don’t need to feel guilty when we don’t do it. Society tells us men are these randy creatures always raring to go, and that married women are the ice queens who rarely put out. Because of these preconceived ideas, on the nights I go to bed not wanting to get naked, I feel guilty — even if my husband hasn’t tried to get freaky with me. But this week I finally realized that men (or my man, at least) also have nights when they just aren’t in the mood, and that doesn’t mean our relationship is in trouble.

By this point in the month, we were both looking forward to our private time together, and found we were less likely to use being tired as an excuse to skip sex if we did it right after the kids went to bed.

I put a little effort in on Saturday night — an ombré nightgown in his favorite colors that was cute but comfy. I usually don’t dress up for bed (I prefer comfort over fashion; sue me!), but I thought I’d see what happened if I added a little spark. He looked up as I came out of the bathroom and said, “You can have the sex with me, but I’m wiped so I need to keep my eyes closed.” So I guess wearing a sexy get-up is a good way to let him know you’re in the mood, but it’s not going to be a game changer. Womp.

While I was a tiny bit disappointed that my outfit didn’t get the reaction I was hoping for, in a way it felt good to know that he loves me no matter what I wear (or don’t wear). As much as I sometimes stress over my appearance, my husband really is attracted to me as a person — not just my looks. With everything that’s in the media, it’s easy to feel like sex and attraction are mutually exclusive. So it great reminder that, especially in a long-term relationship, attraction is about so much more than appearance.

Although I don’t think we’ll continue to hold ourselves to a sex schedule going forward, marking some one-on-one sessions down on the calendar has been a great way to revive our flailing sex life and reconnect. There are people and media outlets who’ll say you shouldn’t treat sex like a “chore” by scheduling it, but I disagree. It’s not about checking something off the list because you have to do it even though you don’t want to, like cleaning out the lint trap. Scheduling sex is about managing your priorities.

Making sex an important priority for a month has changed how we talk about that aspect of our relationship. Now we’re both more willing to be honest with each other when we’re in the mood and when we’re not. I’ve learned not to take the frequency of our sex life personally, to not look at that number as a marker of whether or not our marriage is successful, and that having a conversation about more than just our day-to-day details can make me feel just as connected to my husband as having sex does. We may not do the deed as often as the “average” couple with kids, but we know that our relationship is strong and happy.

Even though we won’t be keeping score anymore, if there comes a time when we find ourselves drifting apart from each other again, I’m not against scheduling sex as means to get our mojos back.

More Like This
Ginger Zee Had A Perfect Response After A Troll Asked Her "Who's Raising Your Kids?"
It's A Beautiful Day In Jenny Slate’s Neighborhood
The Best Toys For 3-Month-Olds
Bright & Festive Nails To Rock On July 4th