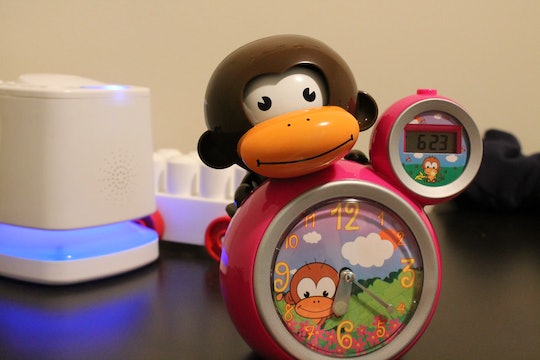 We Tried Sleep Training Clocks, & This Is What Happened

There are lots of things that totally suck about parenthood sometimes — the crying, the diapers, the not being able to pee alone or drink a cup of coffee before it turns cold — but I’m pretty certain that most of the stuff that drives us crazy about having kids would be approximately a billion times easier if we weren’t so freaking sleep deprived. When you have kids, you're obsessed with sleep: yours, theirs, strangers' sleep cycles, well-rested individuals you see on the street. You miss the sleep you used to have, and wondering if you’ll ever get to enjoy it again before you die. You secretly resent your childless friends who still get to sleep in until noon on Sundays — sort of like you used to do before you got pregnant and had to wake up every 10 minutes to pee.

Children are notoriously terrible sleepers, which is cruelly hilarious, because seriously kids, you can nap whenever you’d like. I would kill for that. And yet, they choose not to. Which maybe I could possibly try to understand if I weren’t SO UNBELIEVABLY TIRED.

My 3-year-old twins were actually pretty great sleepers when they were babies, which probably explains why I am totally paying for it now (karma, says all my friends who had colicky infants). Sleep has become such an issue that we’ve tried a laundry list of potential fixes: letting them sleep in the same room, letting them sleep in separate rooms, earlier bedtime, later bedtime, more naps, fewer naps, tiring them out more during the day, feeding them more at night so their bellies would be full and they’d get drowsy from food comas. Pretty much everything we could think of short of “dose them with Gravol”. After complaining to a fellow friend about our new sleepless reality — complete with 5 a.m. wakeup calls — she said:

Oh, you totally need to get a sleep training clock.

Uh, what? What is this magical clock you speak of? There is a clock that will train my children to sleep? Take all of my money!

The idea, she explained, is that you set the clock for what you consider to be an acceptable wake time, and at night, you and your child “put the clock to sleep” together. In the morning, the clock face will change to signify that sleep time is over, thus letting the child know that it is OK to get out of bed and ruin their parents’ lives. (Or, you know, something like that.)

I have to admit, this sounded a bit too good to be true, but after a little research, I saw that so many parents out there swear by these clocks that I figured it couldn’t hurt to give them a try. There are many different kinds of sleep training clocks on the market at different price points, but I didn’t want to invest too much given my skepticism, so I purchased the middle-of-the-road Sleeptrainer by Baby Zoo. I chose one monkey clock (“Momo” is his name, apparently) and one elephant clock (“Mumbo," says the Internet), and brought them home to the twins, who were totally intrigued. I explained that, at night, Momo and Mumbo’s eyes would close, which meant that it was time to go to bed, and then they should stay in their rooms until morning time, when Momo and Mumbo would open their eyes again and music would play. Or, you know, at least that’s what I was hoping would happen.

Feeling pretty desperate to get some extra shut-eye, I set up a sleep training clock in each of child's room, and set them for 6:30 a.m. — a reasonable starting point, I figured. I knew it probably wouldn’t suddenly solve all of our sleep issues in one night, but I decided to stick with it, no matter what, for seven days, and then reassess at the end of the week to see if sleep training clocks really were indeed worth the hype.

More Like This
34 Instagram Captions Perfect For Preschool Graduation Photos
17 Best Potty Training Products For Toddlers
Should You Be Giving Your Toddler Melatonin To Help Them Sleep?
Here's When Your Baby Might Start Sleeping Through The Night For Real