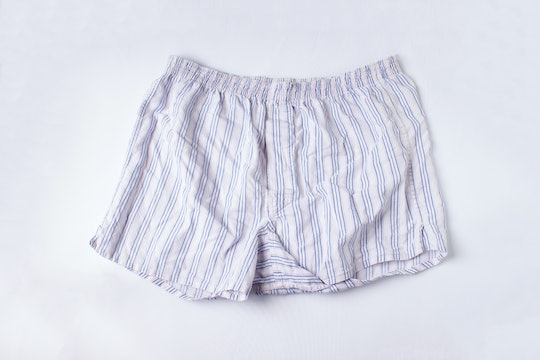 Boxers Are The Way Go For Men Trying To Conceive, New Research Finds

When a couple is trying to have a baby, it can feel like every little thing might make all the difference. And according to a new study, that’s actually the truth in at least one matter — which underwear a man might choose to wear. In fact, wearing boxers may help increase sperm count and even contribute to overall quality, giving a boost toward pregnancy.

The study comes from Harvard’s T.H. Chan School of Public Health and was released Wednesday in the journal Human Reproduction. It followed 656 men at a fertility center between the ages of 32 and 39 who self-reported on the type of underwear they favored. Semen samples were taken and the results were pretty surprising. According to the study, men who favored boxers had a 25 percent higher concentration of sperm and 17 percent higher sperm count in their samples. Business Insider reported that these men also had a higher count of motile sperm, the ones that are most likely to be able to be able to fertilize an egg.

Additionally, NPR reported that the way testes naturally hang away from the body is designed to keep them cooler, but pulling them closer with constricting underwear can raise temperature between four and six degrees.

The study also took blood samples from about half the participants and found that men who wore boxers had 14 percent lower levels of the hormone FSH, according to the research's findings. That’s a hormone that's usually elevated in men with low sperm count as the brain tries to compensate and get the body to generate more sperm, according to TIME. “If there were not compensation their sperm count would be even lower,” Chavarro told the magazine. “But that compensation is not enough, and therefore they still have lower sperm counts.”

This all seems like good news for couples who are looking for ways to increase their chances of getting pregnant without going through the cost and stress of testing. A simple enough lifestyle change could make a significant difference. But how long should a man give the switch to boxers before starting to think about further intervention? TIME estimated it would take about three months of switching to boxers before someone might experience changes in sperm.

Chavarro did tell NPR that even among those who wore briefs or jockey style underwear, sperm counts were still within normal levels, so most couples shouldn’t stress too much. “For most men, it probably doesn’t make a lot off difference. The men who are most likely to benefit are the men who are on the border — who have relatively low sperm count."

The study’s authors did note that there were certain limitations which were not factored into the results and that might have had some impact. For instance, the type of pants the men wore or the material of the underwear were not studied; both factors that could make a difference in temperature, according to Human Reproduction. Blood samples were also taken throughout the day, rather in the morning when testosterone levels are highest, and it’s unknown how that might have affected the results.

Still, when trying to get pregnant, a suggestion as simple as a trip to the store is probably a welcome idea and certainly worth a shot, right?

More Like This
New Report Shows 80% Of Pregnancy-Related Deaths Are Preventable
How Much Hair Loss Is Normal? 9 Signs You’re Losing Too Much Hair
Are You Leaking Amniotic Fluid Or Is It Normal Discharge? Experts Explain
What Does Amniotic Fluid Smell Like? A Nurse Explains