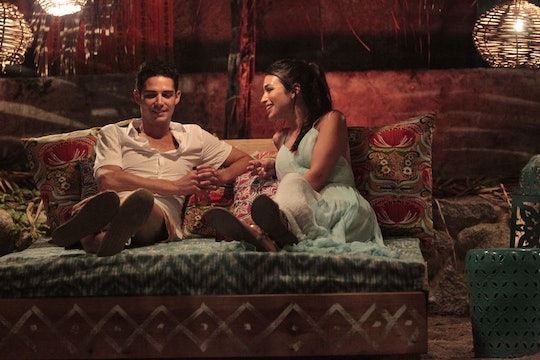 Wells Gave Ashley I. His Rose On 'Bachelor In Paradise' & She Is Thrilled

At the last official rose ceremony on Bachelor in Paradise, no one was entirely sure who Wells was going to give his rose to. Wells himself didn't even look entirely confident. Would it be Ashley, Shushanna, or Jami? In the end, Wells gave Ashley I. his rose on Bachelor in Paradise, and she was over the moon excited about it. Shushanna took herself out of the running before the rose ceremony even started, with the soon to be classic line, "I'm an adult! I don't fight for guys!" But that still left Ashley I. and Jami who were both interested in Wells. For his part, Wells honestly looked more unsure and perturbed than I think I've ever seen anyone look at a rose ceremony.

After a heavy pause, Wells said Ashley's name, and she was thrilled with her "first non-friendship rose." Wells told Ashley that he doesn't know where their relationship is headed, but that he's interested in pursuing it and seeing where it takes them. Ashley solemnly agreed, then happily sang "Alls Wells that ends Wells!" in her confessional interview. Now going into the overnight dates, no one is entirely sure where their relationship is headed from this point on.

"For the first time maybe ever Paradise is actually paradise for me. It's not Bachelor in Hell," Ashley said, immediately before a chat with Wells in which he broke things off. "We're not going to get engaged tomorrow, because that's insane!" he said, proving once and for all that Wells is all of us on this show.

Ashley was excited at the chance to go on the overnight dates, but Wells didn't feel that the two of them were at the right point in their relationship to go to the fantasy suites, and made the decision to leave Paradise, even though he cared about her. Of course, this doesn't necessarily mean that the two of them will never be together, and it's a little confusing that Wells decided to give Ashley his rose only to break up with her the next day. Ashley has famously had a hard time finding love on Bachelor shows (I can't imagine why), and it looks like though she connected with Wells, this time was not much different. Luckily for her, many people have managed to forge relationships without the help of television producers or cameras. Hopefully she'll have more luck outside of Bachelor Nation.