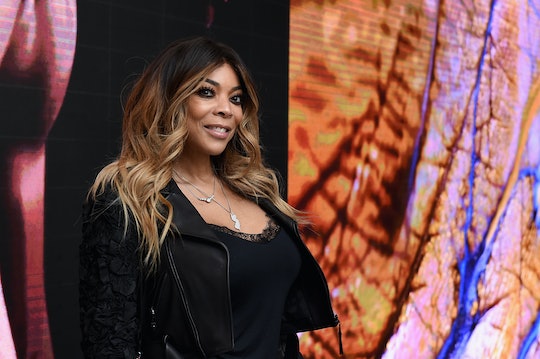 If you watch Wendy Williams' talk show on the regular, you've probably noticed that she's not the biggest fan of Kim Kardashian. The talk show host takes every opportunity to slam the reality star and now, she has done it again. On Monday, Williams criticized Chicago West's reveal in Kylie Jenner's pregnancy video, calling Kardashian "selfish" for it, but fans were not taking the bait. Maybe now is just the time to be happy about adorable babies, instead of the time to stir up drama.

Jenner, 20, gave birth to her first child, a baby girl with boyfriend Travis Scott, on Feb. 1. After refusing to confirm her pregnancy for months and months, she dropped a baby reveal video entitled "To Our Daughter" on Sunday, with exclusive clips from throughout the last nine months revealing her and her family in various important pregnancy moments.

At one point in the video, Kardashian drops by to chat all things baby, and in the footage, she has her new child she recently welcomed with husband Kanye West, a daughter named Chicago, with her. It was the first footage of Kardashian's new baby, which means that excited fans got two babies for the price of one in the baby reveal video. Hurrah!

But Williams didn't see it that way.

On her show, Williams congratulated Jenner before moving on to say, "Also in the video we saw Chicago West for the first time, Kim and Kanye’s new daughter, which I thought was selfish... This is Kylie’s moment to do Kylie’s thing and then Kim just showed up with the baby... I think it's selfish."

There's a problem with that assertion, though. Jenner is the one who released the video, which means she likely had final say over what went into it. It's not like she put the video online without any footage of Chicago, and then Kardashian dropped some adorable Chicago video immediately afterwards in an effort to commandeer the conversation. "When you push out a baby, you push out half your mind," Williams said, by way of explaining why Jenner didn't edit Chicago out, but it seems totally possible that most of the video was put together before Jenner gave birth, when she had plenty of time to rest and think.

Perhaps this is just an example of — gasp — a family supporting each other in their exciting life events.

Williams did not immediately respond to Romper's request for comment.

As one fan pointed out online, there may also have been another, more practical reason for showing Chicago in the baby reveal video. Conspiracy theories that Jenner was Kardashian's surrogate circulated online, and what better way to disprove them than to show Chicago meeting Jenner while Jenner was clearly still pregnant?

Still, this is far from the first time that Williams has targeted Kardashian. Just earlier this week, she criticized some racy, barely-clothed pictures that Kardashian had posted online. On her show on Jan. 30, according to Us Weekly, Williams said:

Kim, it’s clear Kanye has nothing for you except dribble and dribble and evil conversation. It is clear that Kanye does not pay attention to you. It’s clear to me that you’re desperately trying to stay in the spotlight.

Kanye makes money, Kim makes more, why are you still doing this? It’s not even about the mother thing, forget the mother thing, because a lot of people will say, ‘Oh, she’s a mother.’ It’s about, she doesn’t have to do that anymore. That would be like Cardi returning to the pole on a Saturday night or something like that.

Fans weren't having that either. Many people on Twitter called out Williams for hypocrisy, or for being unnecessarily vicious to another woman.

And it seems like Kardashian had her own way of getting back at Williams. She's sending her fragrances to her friends and "haters" for Valentine's Day this year, and Williams is on one of those lists.

Maybe in this kind of situation, all one really needs to say is "Congratulations."