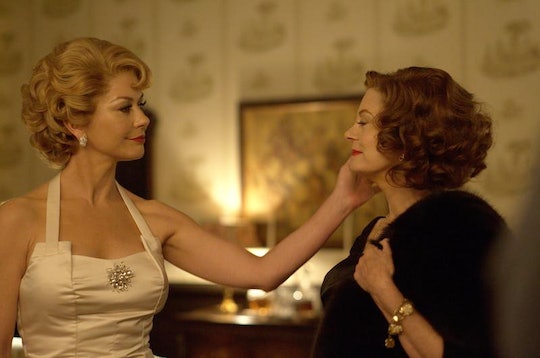 'Feud' May Explore Another Hollywood Dynamic

Ryan Murphy's Feud unveils the real life drama between Golden Age actresses Joan Crawford (Jessica Lange) and Bette Davis (Susan Sarandon). Yet, it's some of the more minor characters that help build the context and truths circling the actresses' tense relationship, or lack thereof. One of which is Olivia de Havilland (Catherine Zeta-Jones). A press image for Sunday night's Oscar-centric episode (shown above) hints at a friendship between two particular characters, which may have fans wondering: were Bette Davis and Olivia de Havilland really friends?

However, even though they may have gotten off to a rocky start earlier in their careers, a friendship eventually grew into what the image above conveys: a relationship built around respect and mutual admiration. So obviously, any past grievances that were had by either party became a thing of the past.

But how far will Feud explore this blossoming friendship? A photo from Sunday's episode shows a close interaction between de Havilland and Davis, which certainly makes it seem like they're close. And considering this time period takes place in the 1960s — well after their initial bumpy start in the '40s — it would make sense. In fact, in real life the two of them went on to work together in another project after the 1963 Oscars.

According to The New York Post, de Havilland replaced Crawford in Hush . . . Hush, Sweet Charlotte in 1964, which had her starring alongside Davis. Clearly, they had to enjoy each other's company if they agreed to work together so much, which for Davis was probably a nice change of pace after feuding with her last costar (cough, Crawford, cough) on the set of Baby Jane 24/7. I'm sure she appreciated having a comrade in arms on set.

Viewers will have to wait and see how this relationship plays out during Sunday's episode, but I have a feeling it's going to convey a fairly close friendship. After all — between Davis and Crawford, there's already enough feuding to be getting on with.