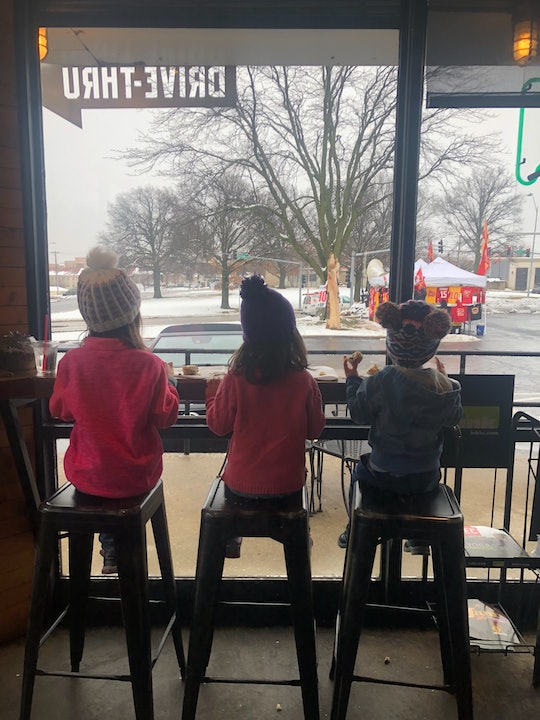 I know I can’t be the only parent who feels like they’re falling short of what they expected motherhood to be. Like many moms, I have these self-appointed standards. Parents want to feel that, in the short time we have with our kids, we have given them experiences that will live on in their memories. We want to believe we have equipped them to thrive in the adult world. We want to parent like Scandinavians, and give our children idyllic and adventurous lives with gentle attention from afar.

The problem with these expectations, whether self-appointed or placed on us by society, is that they often fail to account for the reality of what is going on in our lives.

That’s exactly the point being made in a recent feature in Time about the unrealistic push for American parents to embrace Scandinavian ideals. They agree that more time spent outside, less pressure in academics at a young age, and freedom from helicopter parenting are ideal, but assert that parenting like Scandinavians is not realistic for most American parents.

As someone who tries my damnedest to give my children this exact childhood, I couldn’t agree more.

Here’s the thing, I personally feel deeply connected to the characteristics of Scandinavian parenting that get so much praise. I see the value in giving our children more time to be children, free from homework, the pressure to test well, and the hovering of helicopter parents. I want to back away from this tendency to over-parent and over-protecting our children and opt for more time spent outdoors, freely exploring the world around them instead of running from activity to activity. I’ve even gone as far as keeping my first grader home for school.

What Scandinavian parents have that American parents don’t is a system created to support them in their parenting choices.

And, if I’m being perfectly honest, I have a lot of privilege that makes it possible for me to at least attempt this lifestyle. I am self-employed. I have help with my kids a few afternoons a week. I have a partner who supports these choices.

That being said, as hard as I try to promote this lifestyle for my children, limiting their screen time, sending them outside as often possible, and protecting their time for free play, all of my efforts fall way short of the Scandinavian ideal.

I’m running myself ragged trying to create this dream in a culture that feels strongly opposed to a simple childhood.

What Scandinavian parents have that American parents don’t is a system created to support them in their parenting choices. While I often feel like I’m going it alone, I feel envious of parents around the world who have access to subsidized daycares and preschools where nature play and free play are the norm. As a family who needs two incomes to get by, it’s disappointing to know that I don’t have access to affordable parenting support systems that pick up where I leave off, that will truly embrace this vision for a slower childhood.

I’d love to believe that, if my family chooses not put pressure on our kids to rise above in academics, they’ll still have plenty of opportunities to pursue an affordable and useful secondary education, but I don’t think that’s the case.

Outside of these big-picture examples, I see and feel the contradictions of trying to give kids a low-key childhood every day, even on a simple trip to the park.

It feels as if our society has bought into the idea that children need to be managed around the clock. Which means, no matter how comfortable I feel giving my children space to play, I have to consider what will happen if I decide to read a book or walk laps around the playground instead of hovering over my kids.

For me, making this choice to be hands-off has meant having random adults get onto my children for taking off their shoes. It has meant hearing, “Where is your mother?” more times than I can count, simply because I wasn’t making my presence obvious by standing arms distance from my 4-year-old.

It has meant having to ask another mother to please stop carrying around my daughter at the park simply because she felt she was missing out on adult interaction (because her neglectful mother was reading, instead of playing).

This struggle to create a childhood that doesn’t naturally exist in the States has been discouraging and exhausting.

And in the doctor’s office, I’ve had to resist the temptation to justify why my 4-year-old isn’t writing her letters yet. I’ve had to push back against shame when I’m told she should be writing her name by now.

What seems to common sense when I consider my family in a vacuum, seems nonsensical once I step back and look at us trying to do this in the complicated environment we live in.

Where has this left me, and other parents who feel compelled to embrace this idea that kids’ should be able to slow down and savor the one, short childhood they have? Ironically, I think a lot of us are frenzied, tired, and overwhelmed. This struggle to create a childhood that doesn’t naturally exist in the States has been discouraging and exhausting. And, as we look ahead to our family’s future, we’re faced with the reality that we will often be faced with choices that will require us to compromise what we want for our children in exchange for what is most realistic at this current moment in parenting culture.

Everything Scandi-style might look simple from a distance, but this is much more complicated than we allow for.