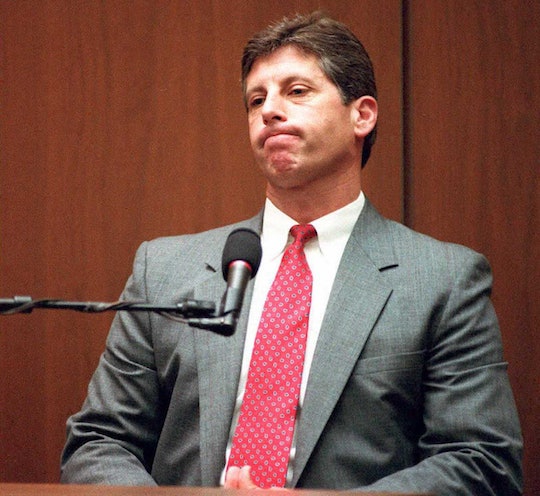 Were The Mark Furhman Tapes Allowed In Court? They Were Key To The Defense's Victory

As we near the conclusion of FX’s American Crime Story: The People v. OJ Simpson, the chaos surrounding the Mark Fuhrman tapes and how his own words sideswiped the prosecution and helped the case collapse has finally come to a head. Fuhrman, a former LAPD detective, had notably discovered arguably the biggest key piece of evidence, the unforgettable leather glove on Simpson’s estate, but the defense later discredited him after finding tapes of him using the N-word after swearing under oath he hadn’t used the word in over a decade. So were the notorious Furhman tapes actually allowed in court?

The answer to that is a resounding "yes." However, while the recordings reportedly covered nearly 13 hours of dialogue, only two excerpts were admissible in court. So, what’s the deal?

First a little background: In 1995, only select excerpts of the tapes recorded by screenwriter Laura McKinny were allowed to be heard as evidence in court. Between 1985 and 1994, the recordings show Fuhrman used the N-word 41 times and spoke of police brutality against black suspects, suggesting racist motivations regarding the discovery of the bloody glove at Simpson’s mansion.

According to the New York Times, only the following two examples of how Fuhrman used the racial slur could be heard in the courtroom:

The tapes raised complex issues of racism in the LAPD and one of its officer’s biases towards African Americans. So, why weren’t all 13 hours allowed to be heard by the jurors?

According to The Times, back in 1995 the court was legally restricted to just two issues at hand. “Is Orenthal James Simpson guilty of the murders of Ronald L. Goldman and Nicole Brown Simpson,” the column asked, “and how should these tapes impact upon the testimony by and about now retired Los Angeles Police Department Detective Mark Fuhrman.”

The courts concluded that the assertion that Fuhrman had framed Simpson was too broad and lacked concrete evidence. “It is a theory without factual support,” The Times report read. “It fails to support the admissibility of these incidents of alleged misconduct as prior bad acts or evidence of custom and habit.”

Fuhrman ultimately perjured himself by lying about his use of the N-word, and after doing so he invoked his 5th amendment right and refused to answer any questions posed by the defense that he had framed Simpson. He also denied that he was a racist.

Time has passed, but with 20 year-old trial back in the spotlight so are the Fuhrman tapes, with a whole new audience of fresh eyes to scrutinize and question them. Fuhrman has not publicly commented on the series and has not expressed his opinion of how he was portrayed, however in his book A Crime in Brentwood he wrote,

I apologize for the pain I caused with my insensitive words. However, one thing I will not apologize for is my policework on the Simpson case. I did a good job; I did nothing wrong.