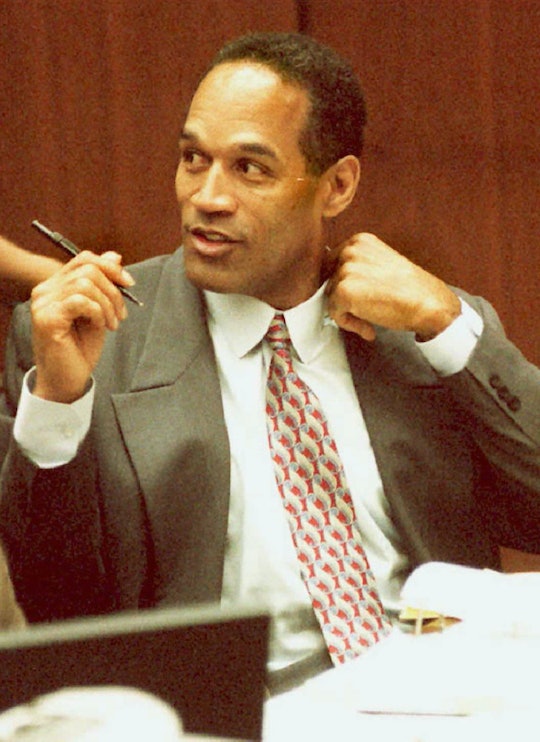 Were There Riots After The Verdict In The O.J. Simpson Trial? The Decision Had People Talking

There is a reason the O.J. Simpson trial is referred to as the trial of the century; the sheer amount of attention paid to it made it unique even if it wasn't for the divisive reactions to the outcome. Nearly the entire country was fascinated with the case and eager to see how it turned out, and the length of the trial coupled with the around-the-clock coverage meant that everyone had made up their minds one way or another as to whether Simpson was guilty or not. People were personally invested in the verdict to the point that there was real fear that there might be riots if one side was disappointed by conclusion. But were there riots after the verdict in the O.J. Simpson trial?

The People vs. O.J. Simpson: American Crime Story showed how volatile race relations were in Los Angeles at the time by opening with footage of the Rodney King riots in 1992. It set the tone for the series and also kept that potential violence in the minds of viewers. So while, no, there were no riots after the not guilty verdict in Simpson's trial, the fact that there was such fear of them is important and highlights the show's running themes of police brutality and corruption – and how that fed into the outcome of Simpson's trial.

The case had become just as much about race as it did about finding the justice for Ron Goldman and Nicole Brown Simpson. An article written by Mike Royko for The Seattle Times in 1995 is rife with such sarcasm, with lines like, "For one thing, there was no rioting. I had feared that thousands of furious blonde, blue-eyed women and their brunette sympathizers would take their rage into the streets, burning, killing and looting." Royko's displeasure with the mistakes on the prosecution's part made during the trial are clear, such as people focusing on the aspects (for example, Fuhrman's racism and not the DNA evidence). Others saw the deep racism that was entrenched not just in the trial and society itself, but in comments that basically amounted to the idea that "whites don't riot" without ever saying the reasons they "don't riot." Roger Boesche addressed that idea in an article for the Los Angeles Times, also published in 1995.

On a radio talk show shortly after the verdict in the O.J. Simpson case, a caller half-jokingly urged whites to riot. The talk show host and subsequent callers concluded that, of course, white people don't riot. But in reality, if "to riot" means something like "to wreak havoc on others," then white Americans have been rioting for some time. But when white people riot, they do it silently, almost invisibly, albeit painfully.

The verdict in the O.J. Simpson trial became a symbol that unfortunately drew attention away from the murder victims even as it drew attention to an issue that was and is still important. The trial represented a victory for black Americans against a racist police force, but it did not find justice for the murders at its heart. The issues surrounding the case are complicated and difficult to untangle; as the fictionalized version of Johnnie Cochran's wife says on The People vs. O.J. Simpson, Simpson and the trial were "imperfect vessels" for very real problems.