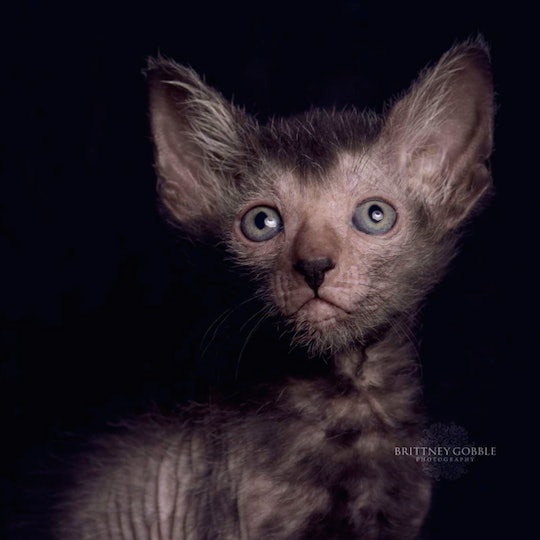 "Werewolf Kittens" Are A Thing And You Need One In Your Life, Like, Yesterday — PHOTOS

For most of my life, I've considered myself to be a dog person. Then, I moved in with my now-husband and he convinced me that we needed to get a cat. When we met “our” cat and decided to adopt her, it turned out she had a runt of a little sister that was probably never going to get adopted, so somehow we ended up with two cats. I’m still not really a cat person, but I will call myself one if it means I can get me one of these incredibly adorable werewolf kittens, also known as Lykoi cats.

According to the website, these cuties began as a genetic mutation in regular shorthair cats. This mutation presents with no undercoat, golden eyes and larger ears, giving the cats their unique, werewolf-like appearance. After rigorous testing, breeders Brittney and Johnny Gobble began breeding cats with the same mutation from different families, so they could diversify the gene pool. They are now considered an “Advanced New Breed” by The International Cat Association, so yes, these are the real deal.

Clearly, we need more of these cats in our lives. They aren’t nearly as creepy as those Mexican Hairless cats (which, you know, some people like. Just not me) and they aren’t as mind-numbingly cute as the Scottish Fold cats that are in a million YouTube videos. No, these are kitties you can cuddle and respect for their distinctiveness.

One of my cats consistently poops just outside her litter box. I wonder if I could trade her in for one of these cuties? I bet they don't poop outside their litter boxes.

Seriously, why aren't you in my life already, sweet kitty?

Ihis one looks a little bit like Hugh Jackman, and I'm into it.

Maybe we could just introduce one of these kittens to my current cats? I'm sure they'd be fine with a new pal. Nope, they wouldn't be jealous at all. (JK, they would be jealous, and they would be correct to feel that way.)