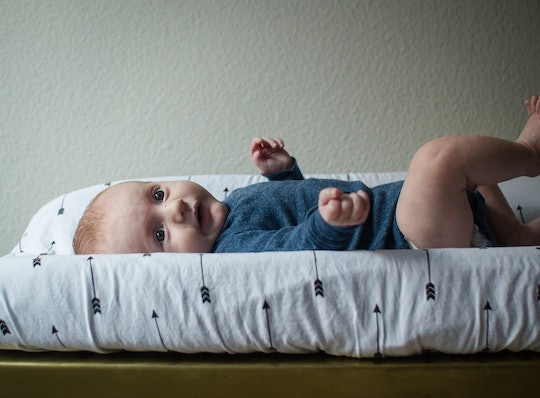 Caring for an infant can be a totally exhausting job, and for a lot of parents, anything that will make it even a little bit easier is usually totally welcome. Old-school methods like cloth diapering may be experiencing a resurgence in popularity these days, but there's no question that disposable and pre-made items are helpful for convenience and a little extra sanity (not to mention less laundry). The downside? The impact these products have on the environment is significant, and while diapers might get the most attention, wet wipes are a huge environmental problem, too. Add in the proliferation of non-baby-related wipe products on the market, and it turns out that the wet wipe problem might actually be more pronounced now than ever.

For many parents, disposable baby wipes are a diaper bag necessity. Not only are they helpful during diaper changes, they're also great for wiping sticky hands and faces, snotty noses, or any other inevitable kid ickiness. But according to The Atlantic, well-known wipe companies found yet another use for these multitasking cloths in the mid-2000s, when they began marketing baby wipes as a kind of toilet paper alternative for adults. The (supposedly) flushable wipes started to become super popular, and in 2015, sales of adult wet wipes actually surpassed $2 billion.

The problem? While wet wipes might feel like an improvement upon regular old toilet paper, they're actually causing a lot of problems for sewer systems. That's because, despite being marketed as acceptable to flush, wet wipes don't actually break down the way that toilet paper does, and can easily clog drains and sewer lines, according to The Guardian. In fact, it only takes a few flushed wet wipes to cause a clog, and once those wipes are mixed with fats or oils, the resulting blockage in public sewers (stomach-churningly known as "fatbergs") can be gigantic. According to The New York Times, in 2013 a utility company in London removed a 15-ton fatberg from a sewer system, and officials in New York City said in 2015 that "wipe-related equipment problems," have cost the city more than $18 million since 2010.

Pipe blockages aren't the only reason that wet wipes are problematic though. According to The Telegraph, many wet wipe brands contain plastic to help make the wipes sturdier. But that also means that they never quite break down entirely: over time, they turn into microplastic, which can pose a big threat to marine life if they end up in the water.

According to The National Ocean Service, plastic is the most common type of marine debris found in American lakes and oceans. The potential negative effects of microplastic on marine life is one reason why plastic microbeads in cosmetics and personal care products were banned in the United States in 2015, according to CNN, but the breakdown of plastic in items like wipes is another major cause of microplastic debris. According to The Telegraph, microplastic is regularly ingested by marine organisms — including fish and seafood that may ultimately end up being consumed by humans. In fact, a 2015 study from the University of California, Davis, found that about one-quarter of the fish sampled from fish markets in California and Indonesia contained man-made debris like plastic or fibrous material.

But it's not just the potential human impact that's problematic — the Marine Conservation Society's Charlotte Coombes told The Guardian that when marine wildlife eat plastic debris like wet wipes or discarded plastic bags (common among turtles, who mistake the bags for jellyfish), “it just stays in the stomach of the animals and quite often they just die of starvation."

Clearly, flushing any kind of wet wipe is a very bad idea, but what about just tossing them in the garbage? Well, you probably shouldn't do that either. According to The Daily Mail, "alcohol, preservatives, fragrances, cleaning and moisturising agents," are often added to wet wipes, but those chemicals can pose problems when the wipes end up in landfills — especially if they are designed to be antibacterial (bacteria and enzymes are needed to actually break down solid waste). And since wet wipes don't properly biodegrade, throwing them in a compost heap definitely won't help.

So what should you do to help combat the environmental issues surrounding wet wipes? For one, consider going back to your pre-wet wipe life: using regular toilet paper after going to the bathroom, removing your makeup with a washcloth, washing your hands with soap and water, and cleaning surfaces with a reusable cloth instead of cleaning wipe.

For parents, wipes might be a bit more difficult to part with for diaper changes. But swapping disposable wipes out for reusable cloths and plain water will save a lot of waste — not to mention that it could help prevent any possible sensitive skin reactions that may occur from using pre-packaged wipes. If that seems like a bit too much though, it's worth considering that any reduction in waste can make a big difference overall: maybe keep the baby wipes for your baby's diaper changes or for emergency clean up when you've left the house, but use reusable items and normal soap and water for everything else.

It's not exactly surprising that disposable wet wipes have become so successful — as consumers, we often love products that make our lives more convenient, and companies are always looking for new ways to market their products. But the long-term impact of these ultimately unnecessary items seems too important to ignore. It may not be entirely necessary to turn your back on wipes altogether, but if they're something you use often, it might be time to find a way to start cutting back.