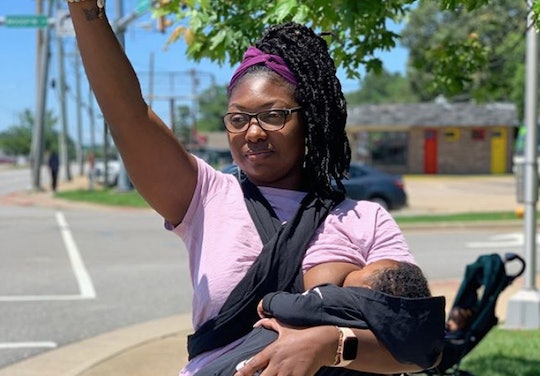 We've Been In This Fight For A Long Time, & Can't Forget About Black Women

The story behind a viral moment from Black Lives Matter protests, as told to Romper.

Trayvon Martin really opened my eyes to police brutality and how it affects the community. I was a young adult when that happened, so in party mode, but like, "Whoa, what's really happening in the world around me?" Fast forwarding to now, I saw the opportunity to get out and make my voice heard in person. I had all my kids with me. My other son, he's in the stroller in the background of the picture. So all my children were there. My cousin invited me. The protest was set up, there was a group of people on each corner, a couple of miles into Newport News, where we have a main street, Jefferson Avenue.

I was in tears the whole ride down — I pretty much saw protestors on every corner with their signs, Black Lives Matter, No Justice No Peace, just all types of signage showing solidarity for the movement — it was just so overwhelming. People were honking their horns, putting their fists out just as they drove by.

We can't forget about our Black daughters like Breonna Taylor.

All my children were in the car and my 12-year-old, she was looking at me like, "So you're going to cry the whole way there? Why are you crying so hard?" And my mom was following me because we are in the middle of a pandemic, so what I usually do is either my mom comes with me or I take the baby in the store and my oldest stays with the other two. We finally get to the Walmart because that's where we were headed and she pulls up and she gets out and she's crying too, because she rode down the same street that I did, seeing everything that I saw and she's in tears.

And just before we got to the Walmart, we passed the corner that I was going to be on with the sign and everything and I said, "All right, mom, just forget about Walmart. I have to get to the protest right now. I have to get out there right this second."

My cousin was already out there. And so I packed all the kids up, got them out of the car, snacks, water stroller, iPad, cell phone, everyone's good. A whole set up. Got my lawn chair, a stroller, so I'm ready. And then I have the Moby Wrap for the baby and I'm getting him in there. I had just washed it so it was really tight, the pre-wrapped one. That one really doesn't stretch. Me and my cousin are fighting to get him inside. He's finally tucked in, I'm putting the last wrap on and then he starts crying. I'm like, "Oh, no." I'm just like, "So you're hungry. OK, great." So I take him right back out and I start feeding him and this is my fourth baby, I've breastfed them all past the age of 2. My 2-year-old son that's also in the picture, he's still breastfeeding. So me breastfeeding and protesting, that's just typical Kyla. It doesn't matter. It doesn't matter where I'm at, what I'm doing. My baby is hungry, I'm going to feed him or her. I am a birth worker.

Even with people saying that we have to pray for our Black sons, we totally do, but we can't forget about our Black daughters like Breonna Taylor. Prime example of a Black woman being murdered in her sleep. That's crazy and she is not getting that same attention and I know part of it is because that wasn't videotaped, but at the same time, we just can't forget about the Black women, the daughters.

We've been in this fight for a long, long time.

For me, it was just a lot in that moment. I was out there for myself, for my dad, my uncles, my boyfriend. So all of the men in my life, the women in my life and my children, boys and girls. Then even as a birth worker because Black women are four times more likely to die from childbirth-related complications that could have been prevented at every step of the way. So I was really overwhelmed and I'm still really overwhelmed by it all. It's hitting me in waves. Trying not to cry about everything every day. Just letting it hit me little by little, but to know that all 50 states came together, countries around the world. It's about time. We've been in this fight for a long, long time.

I've gotten a few negative comments, but they're nothing in comparison to the love that I've received because when people find out that I am a birth worker that opens up another door for me to speak on another side of the racism that Black women specifically experience. And it's a lot to take in. When I took the picture, I had no idea that it would blow up the way that it did. I was just me being me. I've always spoken about these issues. I've always made people feel uncomfortable. I have no problem doing that, of being that person that will speak up when everyone's like, "No, everything's fine." Actually, everything was not fine.

And even people saying, "Please be safe with your baby on the front lines." I've been a mother for 12 years and I'm the oldest of six so I'm pretty sure I can make decisions about keeping my children safe. I would never intentionally put them in harm's way. And we were in front of the police station, but there were no cops out.

How many times do we need to see our brothers and sisters die on camera for it to be played on the news time after time after time again? And re-shared a million times. At one point do we say that, "OK, we don't need to see that. Now granted, I know that it pushes things forward in some cases, because of who may see the video. They may have the power to incite more support to get things going. But I just, I know for me, I can't take it. I'm a very sensitive person.

Years ago I would watch the videos because I felt like I needed to see them, not to believe it, but just so it could be even more real. I don't need to see it. I believe it. He's gone. I don't need to see his soul leave his body. That, I don't think people realize just how heavy that is. That's why we're out here fighting, because it's not normal for it to be played in a loop in his last moment. I'd rather see him standing up smiling with his family, his children, his loved ones. I would rather see those images being shared. Of course, with the stories, but we just don't need to see his last breath. He's gone. What more do you need to see?

I'm only this loud because of my family. John Carlos, the Olympic runner with his fist up, that's my family, so this is in my bloodline. Change is just something that my family has been advocating for in many different ways, but it's definitely in my bloodline there. We're just loud for my people.

Adapted from an interview.