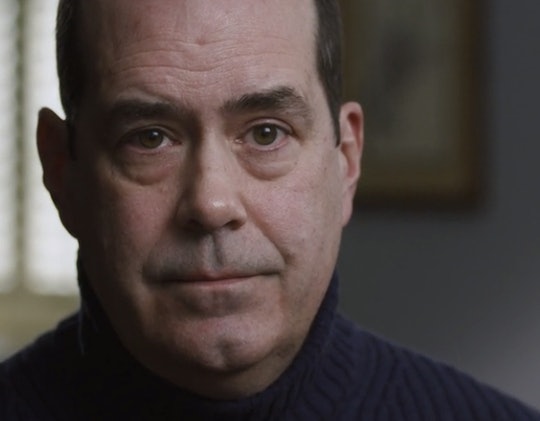 Six years is not enough time to take all the photographs you want of someone you love. At least, according to David Wheeler, whose 6-year-old son Ben Wheeler was killed in the shooting at Sandy Hook Elementary on Dec. 14, 2012. Six years is not enough time to gather enough photographs, enough art class drawings, enough memories. Six years seems like just a blink — especially "if you know that after that 6 years, you’re not going to have them anymore," Wheeler tells me. Wheeler's pain, and the pain of some of the parents of the 19 other children who were murdered at Sandy Hook Elementary School in 2012, is palpable and impossible not to feel in the new documentary Newtown, which seeks to tell the story of the Newtown community in the aftermath of a terrible tragedy.

At times, Wheeler's pain and the pain of the other parents who lost children is so intense, that you want to respond with, "I can't imagine it." But Wheeler said that's the problem — and this seemed to be his message and reason for doing the film — we must imagine his pain, because that's the only way to keep it from happening again. Parents, especially, must understand that those children lost in Newtown could be their own in a future tragedy.

Within eight minutes, the shooter who walked into Sandy Hook had killed 20 children between the ages of 6 and 7 years old and six school administrators. Dr. William Begg, who appears in the film and testified before Congress after Newtown, said each of the bodies had between three and 11 bullets in it. And bullets from the kind of high-capacity assault weapon that the shooter used do not just "go in a straight line," Begg said, according to the film. Instead, they go in, and open up, causing irreparable damage to the person — or, in this case, the child — that they hit.

These details are gruesome. They are the ones that many people want to turn away from. They are the things we brush off by hearing Wheeler's story and saying, as he put it, "I can't imagine."

Within hours of the shooting, Wheeler said in the film that his surviving son Nate, who was also at the school and was 9 at the time, expressed fear to him. So, Wheeler said what every father would: "It's going to be OK," according to the film:

And, his immediate response, as you might imagine, was 'That’s what you said to Ben.'

Because it wasn't OK. And what Newtown Director Kim Snyder and Producer Maria Cuomo call the "public health epidemic" that is gun violence in the U.S. isn't OK. Snyder tells Romper the film is a hopeful film, but that she does want to break through the persistent feeling the American public has that they are powerless to the epidemic of gun violence:

Snyder tells me that much of the problem with the way we talk about gun violence in the U.S. is that it becomes a debate about who is pro- or anti-gun safety, and images like that of Nate walking downstairs in his home to imagine how tall his little brother would've been are lost. People separate themselves from the victims, when they should be asking "Could that happen to me?" Immediately, too many people deny that they and their loved ones could — and, will, statistically — become victims of mass attacks like Newtown:

I think there’s a combination of enormous denial ... that we do not want to believe — as a tolerating mechanism in the morning — that we can wake up and have what happened to David happen to us. So I think, it’s part of the aim of the film, was a necessary intervention to break through that desensitization to see this ... as ripple effects. We [the country] are a community and family.

The issue of gun violence has never been an issue of "let's take the guns." The Second Amendment prevents that. Instead, what Synder's above quote shows is that the underlying issue is about protecting communities — it's about keeping families and children safe, and there are a lot of conversations we need to have that keep that end goal in mind: gun violence research and its suppression, mental illness research and mental health infrastructure, public opinion on gun safety, Congress' inaction on legislation, to name a few. Wheeler says, for parents, the conversations that could keep their children safe start at home:

If you have a kid that has an anaphylactic reaction to peanuts, and you take him to a birthday party and there’s a giant bowl of peanut M&Ms on the table, what do you do? You say to the mom or the other parent 'My son’s allergic, so ... what can we do about this?' So, subsequently, that conversation [about weapons] has to happen. Parents have to be able and willing to talk to other parents and neighbors where their kids spend their time and say 'Do you have any firearms in the house? Where are they? Is the ammo in the same place? Are they stored together? Does your child know where they are? Who knows where they are?'

And, sure, these types of conversations will not prevent all accidents, but the conversations themselves are just the starting point.

You have to imagine. You have to stop and think 'What would I do, if it were me? And what can I do right now to make sure that maybe it won’t be me?' Cause there’s always something you can do.

In November 2013, Sandy Hook Elementary School was demolished. A few weeks before, Wheeler says he woke up one morning and decided that he had to see the classroom, even though he previously had no desire to see it. When Wheeler describes visiting the school, he pauses repeatedly, struggling to describe the place where his son was shot:

I didn’t want to, at first. I couldn’t understand why anyone would want to go back. I had no desire to see that place. Part of that was informed by the fact that my son… died on the way to the hospital. So, I didn’t have that kind of emotional connection to that place, per say. ... But, as I say in the film, one morning, I woke up and I realized, that was not how I felt at all. I don’t know if you’ve had that happen recently: You wake up with this galvanic resolution. You realize ‘Oh my God, everything I’ve thought about this is wrong.' And it was one of those, and I realized that I had to go. I had to stand there in that classroom. I had to see it.

Wheeler later said that he is a part of the movement for gun safety reform, but not because he wants to be. "This club that I’m an unwitting and an unwilling member of is just getting bigger and bigger and bigger and bigger," he says. Meaning, he's a part of the group of people who have lost children, mothers, fathers, brothers, and sisters to gun violence, and he doesn't want the club to get any bigger — even though, Wheeler says with conviction, it inevitably will.

Anybody that’s ever had something like this happen to them — and the people to whom it will happen as it continues — many of their friends and family will say to them 'I just can’t imagine. I just can’t imagine,' and we heard it ceaselessly. And that’s part of the problem. You have to imagine. You have to stop and think 'What would I do, if it were me? And what can I do right now to make sure that maybe it won’t be me?' Cause there’s always something you can do. There’s always something everybody can do — whether it’s researching the person on the ballot, the names on the ballot the next time you’re in the voting booth, or supporting or assisting organizations that are working to change things — there’s a million things you can do. So just to say 'I just can’t imagine it' and to just shove it off to the side as something that you won’t ever accept is no longer acceptable. You can’t do it anymore.

To find a screening of Newtown near you, visit this website.