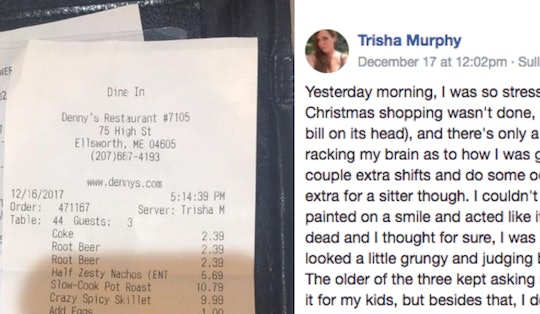 The holidays can be hard on anyone's finances, but especially single parents looking to give gifts to their children. But fortunately, there are still people out there looking to help make it all a little easier. Case in point: one single mom received a $500 tip from her family's new personal "Santa," who singlehandedly saved their Christmas after some unexpected expenses near Christmas.

Trish Murphy, a single mom and Denny's waitress in Maine, went to work more than a little bit stressed. In her Facebook post about her day, Murphy explained that her car had been towed to Bangor, leaving her with a $735 bill. The large bill forced her to work extra shifts, pick up odd jobs, and spend most of her income on a sitter for the extra shifts. After all of that, she wasn't sure how she would make Christmas happen for her family.

All of these frustrating events led up to Murphy working a shift at the restaurant with few customers to wait on and even fewer tips. That's when what would turn out to be Murphy's most interesting table of the night walked in:

I got this table, 3 men. They all looked a little grungy and judging by their demeanor, I figured a average tip. The older of the three kept asking me about Christmas. I just told him I'm in it for my kids, but besides that, I don't really get into it all that much.

The customer told her that he had "come to be Santa," with no explantation at all, and she was understandably creeped out. But, like any good waitress, she played it cool. There was a tip on the line, after all. She put on a brave face, told him she was married to prevent any romantic pursuit, and continued with "pleasant, yet safely distant, conversation."

Once they were finished eating, the customer insisted on Murphy being the one to cash him out, despite the fact that the hostess was in charge of doing that. As it turns out, their server seriously misjudged them.

I thought it a little odd, but obliged anyway. When he put his card in, he had a huge, ear to ear, smile. The receipt printed and I almost collapsed! I looked up at this grungy looking man, my face as white as snow, and tears in my eyes. He just smiled again and said "merry Christmas dear", and almost danced out of the restaurant. He came back in to make sure I didn't have a heart attack. I still might!

This Denny's customer isn't the first "Santa" to help out strangers this holiday season. Secret Santas all over the country have been paying off layaway charges in stores like the Kmart in Six Forks, North Carolina. Jimmy Sidney, the store's general manager told WRAL News that people come in every single day leading up to Christmas to pay off other customer's tabs, with 34 people coming in on Saturday alone. Similar purchases were made across the state of Pennsylvania, at Walmart stores in Ohio, and more.

These acts of kindness have a big impact on their recipients, perhaps more than the givers realize. Murphy shared on her post that her customer made a huge difference in her home:

I don't know this man's name, but I hope he realizes that he literally saved Christmas for my children and I! Good people do still exist. Yesterday was the day I met Santa!

The kindness of people like Murphy's customer, not the actual gifts that result, are what make the holidays so special. Thank you, Denny's Santa, for restoring my faith in humanity.