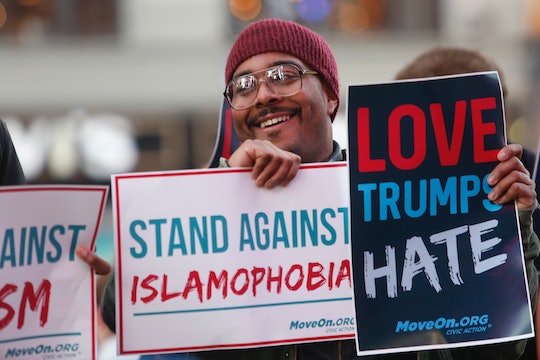 What A Trump Win Would Mean For Everyone Who Isn't A White, Male, Straight Citizen

Donald Trump foiled all the polls on election night, coming in strong in some important battleground states, which is not a source of celebration for a lot of folks. Let's take a look at what a Trump win would mean for everyone who isn't a white, male, straight citizen. Hint: it's not good. Trump has run his campaign on a platform of bigotry, from his appalling comments about women to his equally appalling plans for Latin American immigrants and Muslim American registry. If Trump is able to enact literally any of the plans he has run on, we could be looking at a very different kind of America.

Trump started his campaign by literally calling Mexican immigrants criminals and rapists. Regardless of the fact that this statement is patently untrue and unquestionably racist, it struck a chord with his constituency and this is the general tenor of the comments that gained him followers and brought him to the presidency. Trump still plans to build that wall along the Mexican border and planned to create a "deportation force" which would remove 6.5 million immigrants from the country. Though his running mate has said that his infamous "Muslim ban" is no longer his platform, he did at once time propose to "shut down" all Muslims entering the country, as well as creating a registry of all Muslim Americans. Even if none of these things actually happen, they still become a part of our national consciousness. This is deplorable.

I haven't even covered what Trump has said about women, and what a win for him would mean for them. Trump has no respect for women. This is just a fact. Trump has been accused of sexually assaulting women and bragging about it. Trump rates women based on his own ideas of physical beauty and that is it. Trump does not care about issues that directly affect women and have endangered women for generations. In office, Trump will do nothing to help women, and may even enact policies that are directly in opposition to women's best interests. He said that women must be punished for having abortions in his "great" America. In a presidential debate, he described third trimester abortions as an infant child being ripped from it's mother's womb and killed which is definitely not how abortions work.

Trump is applauded by his supporters for "telling it like it is" and not being afraid to be politically incorrect. But it's not "politically" incorrect. It's just incorrect. And God only knows what that means for anyone who's not a white, male, straight, and cisgendered citizen.