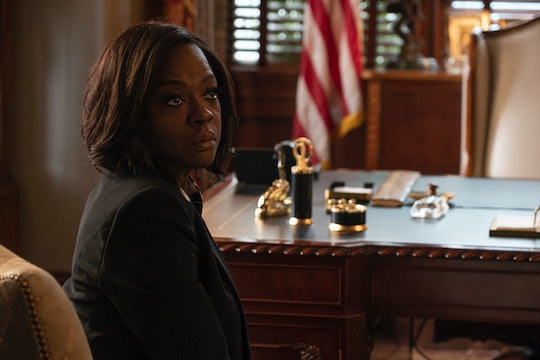 A Mystery Adoption Is The Latest Twist On 'HTGAWM'

How To Get Away With Murder is gearing up to answer the big question posed in the Season 5 premiere: who dies at the wedding? But just before the midseason finale can finally answer it, the show dropped another huge bombshell when Annalise Keating and Governor Birkhead started referencing a mysterious, but clearly consequential, adoption. So what adoption is Annalise talking about? Here's what we know about it so far.

After Annalise tells off the Governor for playing her, she vows to bring her down, but Birkhead has some blackmail ammunition of her own. She reveals that her office is in possession of "the adoption paperwork" and they're not afraid to use it against Annalise. Later, when Bonnie visits her former boss, she quickly assesses that Annalise has been drinking again. Annalise admits the reason why as Bonnie pours her one final drink: "The governor knows about the adoption."

Whether Bonnie takes pity on her because of that or because Annalise has relapsed, she ends up staying over, putting Annalise to bed, and cleaning up after her. It's obvious that Bonnie feels for Annalise, but nobody knows what the exact circumstances of this very dramatic-sounding adoption are. So what could it be? What would drive Annalise to relapse after so many months of successful sobriety, even turning down a bottle of vodka in the middle of a panic attack moments before she argued a case before the Supreme Court?

The strongest, if most obvious, contender is that Annalise had a baby she put up for adoption at some point in her life under dubious circumstances, and the governor is willing to go public with the information, which would somehow end up tarnishing her reputation. The fact that we still don't know who Gabriel Maddox is means he could somehow be involved, presumably as the adoptee to whom the adoption papers belong.

In the Season 4 finale, Frank referred to Gabriel as "Annalise's worst nightmare," and, upon seeing him at Middleton, says over the phone "her kid is here." Although, to be clear, we don't know to which "her" Frank is referring to there. Timing-wise, Gabriel could definitely be Annalise's son, and although early theories favored him to be Bonnie's long-lost child, it was eventually revealed that Bonnie's sister murdered her baby after he was born.

Another possibility suggested by the governor's specific use of the word "paperwork" is that Annalise, in her capacity as an attorney, forged adoption records at some point in her career. The adoption could be connected to her personally, but it's just as likely that, for some reason she found morally defensible, she abused her power to save herself or a client some grief. Maybe one of her students has mystery parentage and she's been protecting them from afar, like she did with Wes. Could one of the Keating Four or someone else in their midst learn that they were secretly adopted? Anything is possible but my guess is that this particular question won't get answered till the second half of the season.