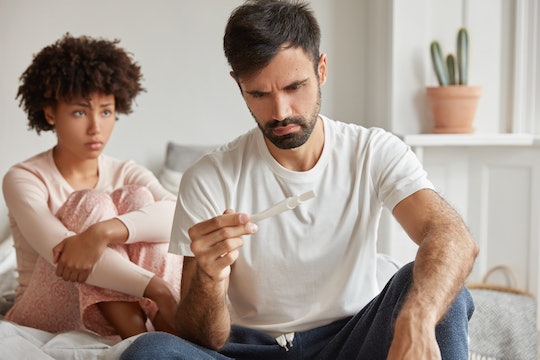 It's long been known that women of "advanced maternal age" face an increased risk of complications during pregnancy. Women over 35 also tend to have more difficulty getting pregnant in the first place — and have a greater risk for chromosomal abnormalities. Meanwhile, it seems as if guys can basically procreate without issues until they die. Not fair, right? Well, as it turns out, this isn't necessarily the case. But what age should men freeze their sperm, exactly?

A new study published in the journal Maturitas found that men 45 and older can experience decreased fertility — as well as put their partners at an increased risk for pregnancy complications like gestational diabetes, preeclampsia, and preterm birth. “While it is widely accepted that physiological changes that occur in women after 35 can affect conception, pregnancy and the health of the child, most men do not realize their advanced age can have a similar impact,” said study researcher Gloria Bachmann, director of the Women's Health Institute at Rutgers Robert Wood Johnson Medical School.

So what other issues, can advanced paternal age pose? Let's take a look at what 40 years of research has concluded. Babies born to older fathers were found to be at higher risk of: Premature birth, late still birth, low Apgar scores, low birth weight, and higher incidence of newborn seizures and birth defects — like congenital heart disease and cleft palate. The children also had an increased risk for childhood cancers, psychiatric and cognitive disorders, and autism.

“In addition to advancing paternal age being associated with an increased risk of male infertility, there appears to be other adverse changes that may occur to the sperm with aging," Bachmann explained. "For example, just as people lose muscle strength, flexibility and endurance with age, in men, sperm also tend to lose ‘fitness’ over the life cycle."

What does all of this mean for men, though? Bachmann recommended that physicians advise older men — just as they do with older women — about the role age plays in conception, pregnancy, and the health of their potential children. “While women tend to be more aware and educated than men about their reproductive health, most men do not consult with physicians unless they have a medical or fertility issue,” Bachmann said, according to Rutgers. And if men plan on holding off on fatherhood, they should consider freezing their sperm before turning 35. (Or at least by the time they're 45.)

For the record, this isn't the first study to observe that men have a biological clock when it comes to fertility. According to The Guardian, the success rate of IVF was 73 percent for couples in which women were younger than 30 but the male partners were between 30 and 35. However, when the women were younger than 30 but the men were between 40 and 42, the chance of a live birth dropped to 46 percent.

The bottom line? A man's age not only affects the chances of a couple becoming pregnant — it absolutely plays a role in the pregnancy and health of that child. So it's probably a good idea for both men and women to be having a conversation with their doctors if they plan on delaying parenthood. Because as this study suggests, freezing their sperm by age 35 might be a smart option for guys who want to hold off on fatherhood,