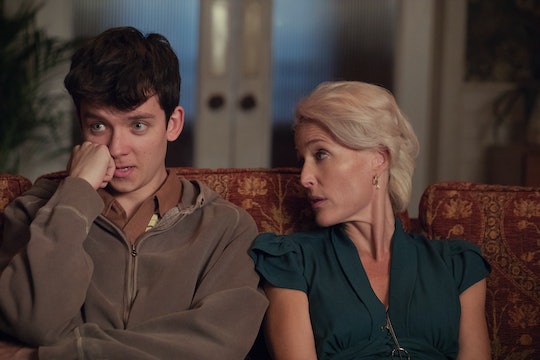 Netflix's new comedy series, Sex Education, tells the story of Otis Milburn, the teenage son of a sex therapist, who goes into high school knowing much more about sex than the rest of his peers, and eventually uses this knowledge to help his fellow teens deal with their own sexuality. The show centers around highschool kids, but features some mature topics, which has some parents wondering: what ages should watch Sex Education on Netflix?

According to Netflix, Sex Education is rated TV MA (for mature audiences) and may not be suitable for children 17 and under. Common Sense Media rated the series appropriate for kids aged 16 and up, and noted that it contains extremely frank sexual content including scenes with nudity and sexual intercourse. The series also contains scenes where the characters explicitly discuss things like orgasms, body fluids, sexual positions, same-sex relationships, and other sexual practices.

In the series, actress Gillian Anderson (X-Files) plays Jean Milburn and actor Asa Butterfield plays her son Otis. Jean is a sex therapist who often talks her son openly about sex, and while it makes him uncomfortable, his mom’s wise insights often come in handy when he talks to his friends.

In an interview with Esquire, the actors talked about the importance of parents discussing sex with their kids, but admitted it can be hard sometimes. “It’s not easy for either party,” said Butterfield. “It’s not a conversation that comes naturally and in my experience it’s not really conversation you want to have with your parents. It’s a part of your life that they’re not involved in... it’s weird.”

Anderson added that while many parents plan cool ways of talking to their kids about sex, when the time comes, the conversation can be overwhelming. “I think a lot of parents think that actually they’ll be able to handle that, you know, the birds and the bees conversation, and that they’ll be able to normalize it and make it cool in some way,” said Anderson. “But it’s hard and when you’re actually face to face with that as opposed to thinking of that as a huge thing that you might do, when it’s that moment, it’s really easy to either one, skirt as a parent entirely, or to become tongue-tied and realize that how [difficult it is] to make this thing sound —[like] it’s not either a bad thing, or a dangerous thing or something to be afraid of.”

Talking to kids about sex can be awkward, but watching shows about sex can be equally as uncomfortable, especially when your family isn't ready. So, if you are questioning whether or not you child should watch Sex Education, it might be a good idea to take a look at the series before hand.

Sex Education is available to stream on Netflix.