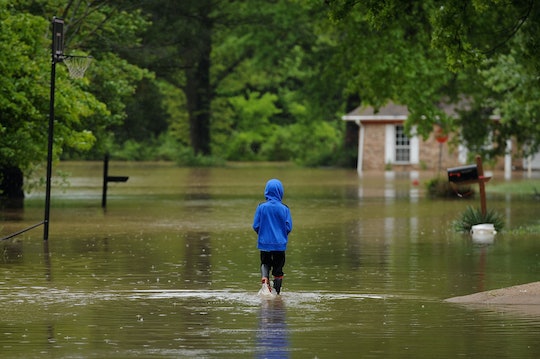 Now that President Donald Trump has officially announced his decision to take the United States out of the Paris Climate Agreement, the nation is left wondering about a lot of things — like how our ecosystems will suffer in the future and what America will look like for our kids without this incredibly important deal in place. Back in 2015, representatives from 196 countries made a historic agreement to make a serious effort to curb global warming by reducing their greenhouse gas emissions. In the United States, those emissions stem primarily from people burning fossil fuels for electricity, heat, and transportation — and we're one of the biggest culprits in the overall climate change game.

According to The New York Times, studies have shown that if these carbon emissions continue to pollute the atmosphere, then temperatures will continue to rise worldwide. “The planet won’t just be hotter, but it will also suffer from rising sea levels, more powerful storms, droughts that lead to food shortages and other extreme conditions,” Jonathan Ellis from The New York Times wrote of Trump’s decision to pull out of the Paris deal.

Despite these scientific risks, many conservatives believe the plan is bad for the United States and Trump agrees. “As someone who cares deeply about our environment, I cannot in good conscience support a deal which punishes the United States," the president said on Thursday, according to CNN. "The Paris accord is very unfair at the highest level to the United States."

Without American involvement — the United States joins Nicaragua and Syria as the only countries that aren't involved with the Paris agreement. But Nicaragua didn't sign the initial accord because it didn't do enough to punish those who did not comply with their own mandates; Syria, due to sanctions, wasn't at the initial summit at all. The nation could look grim as years of progress toward combating climate change begin to unravel.

Withdrawing from the deal won't conclude until November 2020, so a lot could happen in the meantime. But, if things continue on this path, these are some of the ways the future for American children will be negatively affected.

According to National Geographic, up to "13 million people along U.S. coasts" could be forced out of their homes by the end of this century — with the most at risk living in the Southeast, especially Florida.

Sea levels are rising because temperatures in the oceans and the atmosphere are getting warmer, which has mostly been caused by human activity, such as burning of fossil fuels like coal and oil. If things continue at their current rate, global warming's impact on coastlines and those who live there will be catastrophic.

Warmer temperatures due to global warming combined with precipitation levels, and soil moisture are "turning many of our forests into kindling during wildfire season," according to the Union of Concerned Scientists, a nonprofit science advocacy organization based in the United States.

Since the 1980s, wildfires in the western United States have already shown a drastic increase. According to research from 2006 published in Science Magazine, wildfires are occurring nearly four times more often and are burning more than six times the land area than they did decades ago. If nothing is done to change this lethal combination, the likelihood of wildfires will increase.

Water Could Be Further Threatened

According to a 2010 analysis from the Natural Resource Defense Council, climate change could have "a significant impact on the sustainability of water supplies in the coming decades." It claims that by 2050, some states will very likely see a limitation in the amount of water that is available for drinking, cooking, and bathing.

Areas at risk include parts of Arizona, Arkansas, California, Colorado, Florida, Idaho, Kansas, Mississippi, Montana, Nebraska, Nevada, New Mexico, Oklahoma, and Texas, while those in the Great Plains and Southwest United States are at "extreme risk," according to the analysis.

The researchers concluded that if climate warming continues to increase, "we can expect the risks of water shortages to increase with it."

Increased Levels Of Air Pollution Could Have Permanent Health Effects

"Despite dramatic progress cleaning the air since 1970, air pollution in the United States continues to harm people’s health and the environment," according to the Environmental Protection Agency. As for its relation to climate change, carbon dioxide — a greenhouse gas — is the main pollutant that is warming the Earth, which is caused by numerous human activities, such as cement production and burning fossil fuels like coal, oil, and natural gas.

Without environmental regulations in place, more people could be exposed to air pollution and would be at risk of stroke, heart disease, lung cancer, and both chronic and acute respiratory diseases, including asthma, according to the World Health Organization.

While these are only a few examples of how America could look in the coming decades, it illustrates how concerning climate change is and dangerous it could be for the nation — and for our children's futures.