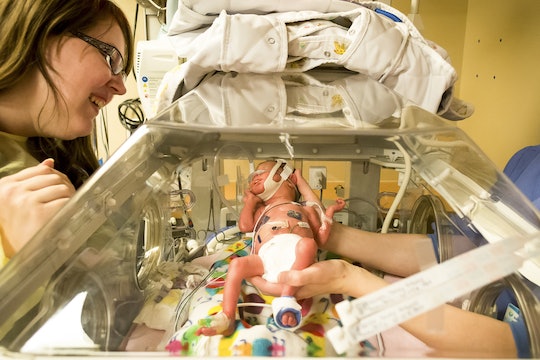 What Are A NICU Parent's Rights In The Hospital? This Bill Lays Them Out

A stay in the NICU is one of the scariest and most stressful experiences a parent will ever have. Watching your baby suffer is absolutely heartbreaking, and trying to bond with them when they're hooked up to all sorts of monitors and devices can make you feel completely helpless. It's easy for parents to feel out of place and disconnected from what's going on. But moms and dads play a vital role in their baby's care, and knowing your parents' rights while in the NICU with your newborn can empower you to be as active as possible in your newborn's recovery.

Keira Sorrells, founder and president of the Preemie Parent Alliance (PPA), knows more than most people about NICU stays and how traumatic they can be. "It's the most unnatural place to be a parent," she says. Her triplets were born at just 25 weeks gestation, and all three had lengthy NICU stays. One of them, baby Zoe, spent a staggering 9-1/2 months in the hospital before she could go home. It was a scary, stressful, and overwhelming time for the family.

Sadly, Zoe's health problems didn't end in the NICU, and she ultimately died at just 14 months old. That tragic loss inspired Sorrells to want to help others, and she decided to start with families who'd gone through similar struggles in the NICU. From that, the PPA was born.

One of the PPA's signature achievements is a document that helps parents understand their place in the NICU. "There are patients' bill of rights in hospitals, but what we wanted to do was create a NICU parents' bills of rights, but do it in a way that encouraged family centered care." The list is written from the perspective of a NICU baby, which Sorrells believes makes it more accessible. "We didn't want it to come off as demanding. We really wanted it to be an approachable document."

The list encourages hospitals to have open visiting hours, help parents thoroughly understand their baby's diagnosis, and let parents hold their babies and participate in their care to the greatest extent possible, including feeding them via breast or bottle. It also reminds hospitals to be patient and understanding with parents during their difficult NICU journey, whether they're dealing with a micro-preemie or a full-term baby with surprise health issues.

No matter what your hospital's specific policies are, the PPA's bill of rights is unlikely to clash with them because it largely focuses on the many ways hospitals can promote bonding and support moms and dads. Sorrells says laying out all those things is necessary, though, because many parents may not even realize that they're missing out on opportunities to be involved. "You don't know what you don't know," she says. Doctors and nurses often need the reminder as well. "It may not even cross their mind that you don't know that you can take your baby's temperature."

Dr. Anthony Orsini, vice chairman of the Department of Neonatology at Winnie Palmer Hospital for Women and Babies in Orlando, Florida, agrees that parents sometimes find themselves walking on eggshells in the NICU. "You often feel you can’t do that and you’re at the mercy of the doctors or nurses." While there are certainly some conditions that are so serious parents won't be able to handle their baby (such as if they're intubated), there are many opportunities where a parent can take charge. Both Orsini and Sorells want parents to know that they should feel comfortable holding their baby and doing skin to skin as much as possible, even if you have to ask a nurse to help you remove your baby from a tangled mess of tubes and wires in their incubator.

Orsini says parents can sometimes be too intimated to speak up. “They think, oh the doctor’s busy, I don’t want to be needy.” But he says parents are entitled to know exactly what's going on with their baby at all times, even if they can't physically be in the NICU. “It’s your right and you should be receiving a phone call from your doctor every day when your baby is being seen… You should be up to date.”

Sorrells believes that empowering moms and dads in the NICU ultimately benefits newborns most of all. "These babies are discharged to the parents, and you have to have parents who are emotionally, mentally, physically, psychologically able to care for that baby," she says. And science bears out the importance of involved parents during these earliest days. The Stanford Children's Hospital reported that having a strong parent-baby bond was the single most important factor in improving adult cognitive abilities. A NICU stay is a tough way to start a life, but a parent who's a strong and knowledgable advocate can go a long way toward ensuring their baby overcomes it.