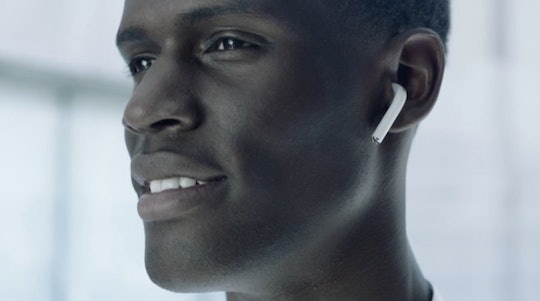 What Are AirPods? Apple's New Headphones Are A Wireless Game-Changer

Kiss those tangled headphones goodbye, ladies and gents: Apple intends to cut the cord, one connection at a time. On Wednesday, Phil Schiller, vice president of worldwide marketing at Apple, unveiled 10 new distinct features of the forthcoming iPhone 7 and iPhone 7 Plus. Insiders have speculated for quite some time that Apple would ditch the headphone jack in favor of Lightning-cabled EarPod headphones — and the rumors turned out to be true after all. But more impressive is with what Apple intends to replace wired EarPods with the introduction of the iPhone 7: AirPods. What are AirPods? Besides looking ridiculously awesome, Apple is changing the game for wireless connectivity.

The new AirPods looks almost identical in design to the EarPods that ship with all iPhones currently. The major change of course, is the lack of wires. But the bigger news is that Apple introduced major a proprietary wireless technology with its Apple W1 chip that's not built on Bluetooth. Under the hood, the AirPods have not only speakers, a microphone, and antenna completely encased within each ear bud, but they also each have dual optical sensors and dual accelerometers. If Apple has its way, wired headphones will become a thing of antiquity.

What makes the Apple W1 chip different from Bluetooth is that, as Schiller put it during Wednesday's presentation, it has "intelligent high efficiency playback with reliably consistent connection." Critics feared that Apple cut the cord not just in a physical sense, but on audio quality as well. If you've ever used Bluetooth headphones before, you know that the sound isn't always that great, and worse still, connection can be iffy. Apple intends to do away with both the flaws of existing wireless audio with their new W1 chip.

The AirPods' optical sensors know when each ear bud has been placed in your ear, so that it won't start playing your music or audiobook until you're ready to listen. Double tapping on either ear bud allows you to pull up Siri. What's also pretty awesome is that each AirPod ear bud has a beam forming microphone, so that as you speak, it reduces background noise when you're on the phone while using your AirPods. If you're used to wired headphones with one ear bud in and the other dangling, Apple's got your back: You can also use just one AirPod at a time if you like, with no degradation in sound quality or connectivity.

What about AirPods battery life? Apple has promised 5 hours of continuous playback time on the AirPods, and they come in their own compact wireless charging case that can allow up to 24 hours of playback time. You can charge the AirPod charger via a Lightning cable connected charger. Scott Stein, senior editor at CNET, showed off a pair of Apple's new AirPods in action at the iPhone event Wednesday:

And if the design wasn't simple enough, setting up your first pair of AirPods couldn't be easier: Open your AirPods case and a screen with the word "Connect" appears on your iPhone. Press the connect button and voilà! Your AirPods are paired to your iPhone — and your Apple Watch at the same time, if you have one. Oh, and don't worry about hitting the button for every single Apple device you have, either: iCloud will propagate your AirPods setup across all of your devices.

Schiller also showed off some swanky new wireless Beats headphones using the Apple W1 chip, including the Beats Solo 3 iconic DJ-style headphones, as well as a Powerbeats version and a new line of affordably-priced BeatsX version for casual users. AirPods have been priced at $159 per pair. Preorders for the new iPhone begin this Friday and will be available for purchase on September 16.

It remains to be seen just how audiophiles and Apple fans will take to the new standard of wireless that Apple has unveiled with the iPhone 7 and its AirPods, but there's no denying that the future is here and there's no stopping Apple now.