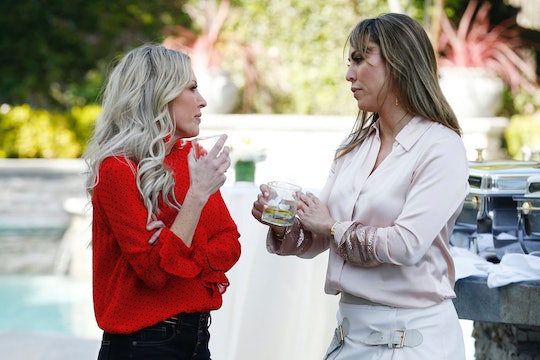 The Real Housewives of Orange County returns to Bravo on Aug. 6, and while OC OG Vicki Gunvalson has been demoted to a "Friend of the Housewives" this year, newcomer Braunwyn Windham-Burke is warming up for her rookie season. She was born and raised in Orange County by a nightlife queen-turned-medical doctor-turned-Burning Man priestess — yes, Braunwyn's mom will be part of the show — but she has quite an impressive family of her own, boasting seven kids with her husband Sean. Of course, inquiring minds may want to know what Braunwyn's kids' names are, considering she has a pretty unusual name herself.

Caden and Curren are twins, for you math whizzes out there, and in an interview with ET, Braunwyn revealed that losing a baby after getting pregnant with twins again was partially responsible for her super-sized family.

"After the boys were born — [kids] four and five were twins — I kind of was like, someone’s missing. I didn't feel that feeling of being done," she explained. "So, we went for a sixth."

We had twins again, and [lost] one. So we went for a seventh, because I sort of just felt like we needed to end on a high note and someone else was supposed to be there. So, when we had our seventh, I felt done...Now, I look at the family photo and I'm like, everyone that's supposed to be here is here.

The newest Orange County Housewife was quick to note that choosing to have a contact sports team's worth of kids wasn't driven by any sort of religious or cultural motivation. Rather, she joked that she and her husband simply like to "get drunk and have fun."

Braunwyn did say, however, that she genuinely always dreamed of being a stay-at-home mom and has successfully been doing that job for the past 18 years. (Yes, this means that she's the rare Real Housewife who's an actual housewife, though she definitely considers her parental duties to be a full-time job.)

Even though being a mom was her ultimate dream job, Braunwyn did start to feel like she was losing her sense of self after putting everything she had into seven kids for nearly two decades. (And she's still got 17 years of hands-on parenting ahead of her.) She told People in an interview ahead of the season premiere that she felt herself beginning to unravel.

"Before I got cast on Real Housewives, I was sitting in my bed and I was crying. I looked at my husband and said 'I have to have something else,'" she confessed. "I have been a stay-at-home mom for almost 19 years and I need something that's just for me."

It's a bold move to go from SAHM to Bravolebrity, but Braunwyn seems totally grounded. Whether she stays that way after this experience remains to be seen.