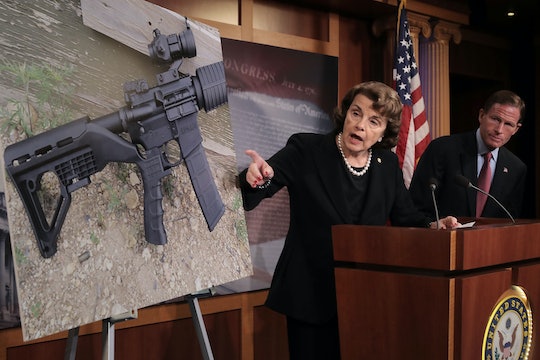 After The Las Vegas Shooting, This New Gun Safety Bill Would Ban A Lethal Device

On Wednesday, one California senator introduced a bill that just might take the United States one step closer towards tighter gun control. After the recent shooting in Las Vegas that left 59 people dead and hundreds more injured, Sen. Dianne Feinstein proposed that the United States ban the sale and possession of "bump stocks," a device that was found in the Las Vegas shooting suspect's room after the tragedy. But just what are bump stocks, and how would banning them affect the rates of gun violence in the United States?

Update: On Thursday, Oct. 5, the National Rifle Association (NRA) — one of the nation's most prominent lobbyist group that often opposes stricter gun regulations — said that bump stocks, which are still legal, "should be subject to additional regulations," according to Reuters. House Speaker Paul Ryan also said on Thursday that the legality of bump stocks is "something we need to look into," CNN reported.

Earlier: Bump stocks, or bump-fire stocks, are devices that can be attached to semi-automatic rifles to increase their firing speed. A bump stock essentially replaces a rifle's grip and makes it repeatedly buck back and forth, according to the Associated Press, letting the shooter's finger "squeeze" the trigger much more quickly. With a bump stock attached, a semi-automatic rifle can match the shooting speed of an automatic weapon, letting it fire at 400 to 800 rounds per minute rather than a semi-automatic's typical 45 to 60, according to a press release issued by Feinstein's office.

The man who shot at a crowd of over 22,000 people at a country music festival in Las Vegas had bump stocks outfitted on 12 of the 47 weapons found in his room, according to HuffPost. While automatic weapons have been illegal in the United States for over three decades, workarounds like bump stocks make it easy to amplify other weapons' killing power.

And while many left-leaning politicians have been calling for stricter gun laws for years now — President Barack Obama among them — more conservative politicians' defense of the Second Amendment have stalled any progress. (Several senators' close relationships with the National Rifle Association, thanks to the gun group's generous funding, probably haven't helped advance sensible gun control, either.)

But Feinstein's bill to ban bump stocks (along with trigger cranks, slide fire devices, and similar equipment) is one that politicians from both sides of the aisle may have a hard time ignoring. After all, the bill only targets devices that increase a semi-automatic's firing capacity, without limiting the sale of any other accessories, such as those used by hunters. The bill doesn't debate Americans' right to bear arms — it only questions why any ordinary citizen would need to be able to fire off 800 rounds a minute. And the answer, as Feinstein put it in a statement, is pretty clear:

The only reason to fire so many rounds so fast is to kill large numbers of people. No one should be able to easily and cheaply modify legal weapons into what are essentially machine guns.

Indeed, even the people who advocate for access to guns have a hard time justifying Americans' ability to buy bump stocks. For instance, Erich Pratt, the executive director of Gun Owners of America, told the Associated Press that yes, Congress would probably wonder why anyone would ever actually need a bump stock. And yet? "I think the answer is we have a Bill of Rights and not a Bill of Needs," he said.

Over a dozen studies have shown that Americans support stricter gun regulation, and banning bump stocks — an unnecessary and entirely dangerous device — is one way to take a step closer to a safer United States. If you believe people's right to life trumps their right to own a gun that fires hundreds of rounds per minute, consider getting in touch with your senator and urging them to support Feinstein's Automatic Gun Fire Prevention Act.