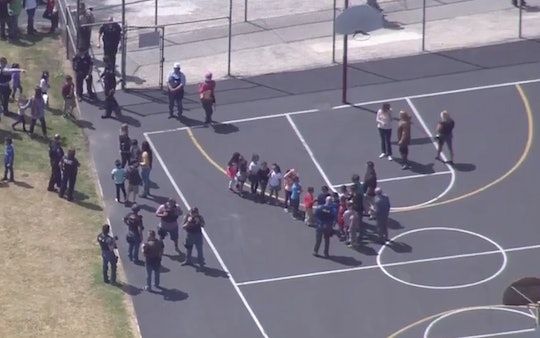 Students and teachers were left shaken on Monday after a gunman entered the North Park Elementary School campus in San Bernardino, California and opened fire, injuring several people, and leaving at least two dead. In the wake of yet another tragic shooting, many on social media, watching the incident in horror, began asking about the state of California's gun laws and whether they should have arguably prevented the incident in the first place. As many have pointed out, California's gun regulations are relatively strict, compared to other states.

"“We believe this to be a murder-suicide," San Bernardino Police Chief Jarrod Burguan stated in a tweet. "[It] happened in a class room. Two students have been transported to the hospital." Burguan noted that "two adults" were deceased and had been found inside the classroom. Two students, he added, had "been transported to the hospital" nearby. The remaining students were taken to California State University, San Bernardino to wait for their parents, who were being held at Cajon High School.

According to The Los Angeles Times, the shooting took place some time after 10:30 a.m. Pacific Time. School officials speaking with the outlet noted that the incident had been "isolated to the campus," and first responders stated that they had set up a triage area for the victims. No details about the shooter were immediately released, though KTLA 5 reported that the shooter was male and that the deceased adult was a female.

As many have pointed out, one of the more troubling aspects of the shooting was the fact that North Park Elementary is a closed campus — once school begins, the school goes into a sort of "lock-down" mode. As of Monday afternoon, officials had not stated how the shooter had been able to access to building at all.

However, a number of social media users instead chose to criticize the fact that, while California's gun laws are some of the most restrictive in the United States, they seemingly did nothing to stop this particular shooting.

Part of that is true: The state's laws are particularly restrictive. According to the California Department of Justice, "A person may not possess or transport an assault weapon," a "short-barreled shotgun or short-barreled rifle," or "any firearm that is not immediately recognizable as a firearm," among other things. Under the California penal code, all firearms must be purchased through a licensed dealer, and all buyers must register their ID and fingerprints with the state, as well as obtain a five-year firearm safety certificate (a $15 license fee) prior to purchasing the weapon.

That firearm safety certificate itself comes with its own set of requirements, including a written test administered in English or Spanish (though the guidelines specifically state that, if an applicant cannot read, the state must offer the test orally). The test covers the following:

The laws applicable to carrying and handling firearms, particularly handguns; The responsibilities of ownership of firearms, particularly handguns; Current law as it relates to the private sale and transfer of firearms; Current law as it relates to the permissible use of lethal force; What constitutes safe firearm storage; Issues associated with bringing a handgun into the home; and prevention strategies to address issues associated with bringing firearms into the home.

Despite these things, it's still possible for a citizen to obtain a gun in California without going through the typical motions required of those purchasing a weapon; In the case of children, California law dictates that parents and grandparents may give a firearm to their children without needing to obtain a firearm safety certificate.

"The transfer of a firearm between a parent and child or a grandparent and grandchild is exempt from the dealer transfer requirement," the state notes under its frequently asked questions page. "The exemption does not apply to step-children/step-parents, brothers, sisters, aunts, uncles, or cousins." Firearms may also be passed between domestic partners and spouses.

It's important to note that while the state does require some compliance from those making in-family transactions (specifically, "If the firearm is a handgun, the recipient must obtain a Handgun Safety Certificate prior to taking possession and must also submit a Report of Operation of Law or Intra-Familial Handgun Transaction and $19 fee to the DOJ within 30 days after taking possession"), it's hard to know whether family members are actually following that rule or not, at least until something happens or the gun turns up in the other family member's possession.

In addition, while California's gun laws are indeed more strict than other states, there's still no limit to how many guns a person may own; The only major stipulation, the state notes, is that a person is "generally limited to purchasing no more than one handgun in any 30-day period."

There are two important factors that those looking to criticize the state must remember: first, that while the state's regulations are relatively tight, there are still major loopholes and caveats that would reasonably allow someone trying to purchase a weapon to easily — and legally — get their hands on one. Until those loopholes are closed, there will continue to be gun deaths.

Second, even with those loopholes, California's gun laws have worked: According to a New York Times column in July 2014, Teresa Tritch noted that "seven of the 10 states with the strongest gun laws in 2013 also had the lowest rate of gun deaths." Those states include Hawaii, Massachusetts, Rhode Island, New York, New Jersey, Connecticut and, notably, California.

"Proving causality is tough, especially in the United States, which has long had an effective federal ban on gun research, engineered by the gun lobby and sustained by congressional majorities. But available data shows a clear link between strong gun laws and less gun carnage," Tritch explained. She noted, importantly however, that despite strict gun laws, sometimes, nearby states or cities complicate problem:

In the absence of federal action, state gun laws are the public’s best defense against gun violence. But the research by the Brady Campaign and the Law Center has shown that guns bought in states with weak gun laws are often trafficked into states with stronger laws, where they are later found at crime scenes. The scourge of gun deaths in America won’t be fully addressed until Congress enacts, and a president signs, comprehensive gun-control legislation.

As an Everytown spokeswoman told Romper via email on Monday, "There have been more than 200 school shootings since 2013. Today marks the 220th (the 12th in 2017 alone)." Compounding those numbers, Moms Demand Action founder Shannon Watts told Romper in an email statement, "Lockdown drills have become part of standard safety practice. There are solutions out there — too often we rely on thoughts and prayers to do the work our politicians refuse to do."

As Watts pointed out, "until our leaders put our children's safety first" on a widespread, federal level, it's likely that tragedies like the North Park Elementary shooting will keep happening — no matter what state laws or social media critics might have you think.