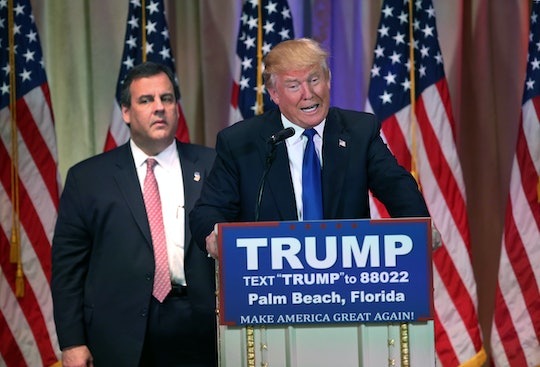 What Are Canada's Immigration Laws? Those Worried About A Trump Presidency Need To Know

If you haven't noticed, real estate mogul Donald Trump is crushing the other Republican candidates vying for the GOP nomination. He also happens to be a bigoted, untrustworthy, walking hair disaster. In the immortal words of John Oliver, "at this point Donald Trump is America’s back mole. It may have seemed harmless a year ago but now that it’s gotten frighteningly bigger, it is no longer wise to ignore it.” Trump may win this thing, and not just the nomination — the whole shebang. That possibility has people running for the hills, or, at least, Canada. So, what are Canada's immigration laws anyways? If he wins, will our neighbors to the north provide much-needed asylum?

This seems like a joke, but after the Super Tuesday results started rolling in this week "move to Canada" became a trending search term on Google. Coincidence? I think not. Thousands of frantic Americans took to the internet to figure out how exactly they could shed their increasingly embarrassingly American-ness and become Canadian. On Super Tuesday, Trump did what many thought at this time last year would never happen. He won seven of the 11 primary-voting states. While that had Trump fans across the country celebrating, the rest of us were busy planning our escape route, so much so that the Canadian government's official immigration site crashed. (Not a joke.)

Vox reported that, though the panic was visible through that online traffic spike, it's not the first time that's happened. There was another huge spike in Canadian emigration threats in history in 2004, "when George W. Bush won reelection":

Of course, these aren't comparing one-to-one internet searches, but rather the proportion of internet searches at that time. The internet was much younger and smaller back in 2004, so the absolute number of 'move to Canada' searches may well have been lower. Still, it's a reminder that this isn't the first mass American emigration threat, and it probably won't be the last.

Even so, this seems a little more serious. Let's do a quick run through of how to become Canadian, just in case. First you have to determine your eligibility. Do you have a skill? Can you get a job in Canada? Are you a refugee (wondering if Americans can fall under this category in case the worst happens...)? Second, you apply. You can apply for a student visa, a work visa, a start-up visa, a skilled worker visa, refugee status, and on and on. But, note: they are all extremely competitive. If by some miracle you are granted a visa, you move on to the third step: start prepping for your new Trump-free life.

Though the immigration laws are strict, some parts of Canada are welcoming Americans with open arms. Cape Breton, a small island off Nova Scotia, just happens to be in the market for more citizens. They made a lovely website, ingeniously titled "Cape Breton If Donald Trump Wins," which lays out all the benefits of moving to this beautiful, serene, GOP-free island.

In reality, it's pretty difficult to emigrate to Canada (especially if everyone's doing it), but there are other options. There's a country nearby that makes emigrating from America quite easy, plus, the cost of living is cheap, the food is delicious, and the weather is phenomenal. What is this mystical land, you ask? Mexico! The thing about Trump's "wall" dividing Mexico and America is that it's all a matter of perspective. From Trump's point of view, he's keeping Mexicans out. If you're on the other side, though, the wall is keeping Trump out. Just something to think about.