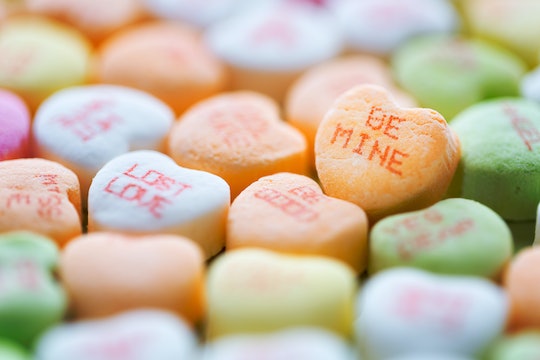 The Ingredient That Makes Candy Hearts So Adictive

Valentine's Day has been one of my favorite holidays since I was a kid. Though I've never had an "official" Valentine, the day was always one of my faves simply because of the amount of candy that came along with it. When Valentine's Day came around, I knew that I had every type of candy out there to look forward to from my classmates including the holiday's staple candy: candy hearts. Though note a favorite of mine, candy hearts intrigued me because I always wanted to know what are candy hearts made of?

Candy hearts — or, as they are officially known, Sweethearts — have been around since the late 1800s and according to CBS News, are the most popular selling brand candy during Valentine's Day. So what is it that makes these candies so good that they've become so appealing to candy consumers?

Surprisingly their ingredients are pretty simple and, as Tech Times noted, the process hasn't changed since they've began making them in 1866. According to Smithsonian, the popular brand's century old recipe includes the mixing of corn syrup, cornstarch, sugar, gelatin and food coloring into a Play-Doh-like ball prior to being rolled flat for printing and cutting. As for the words that are found on the front of the hearts? The process is just as simple as making the hearts. Manufacturers use a print plate with red ink to place the messages on the dough and cut them into heart shapes. Afterwards, they are pushed through a drying tunnel for 30 minutes and mixed together for distribution, according to the official NECCO site.

Though the classic version of the Sweethearts brand is widely known, there are other versions to choose from, too. Fans of the timeless treat can also try the Dazzled Tarts, En Español (for those who are bilingual), sugar free, chocolate, and the Color Your Own Sweethearts.

Whether you're a fan of the small candy or if it's the last on your list of treats to choose from, the thing that remains true is its indisputable impact on our culture as a simply made delectable with a high profit rate.