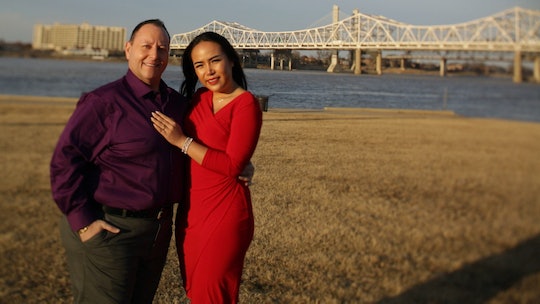 Whether or not 90 Day Fiancé works for everyone, the show has become one of TLC’s more popular docuseries. It even spawned a spin-off, 90 Day Fiancé: Happily Ever After? to follow some of the couples after their journey to the altar ended. At the beginning of Season 3, David Toborowsky and Annie Suwan joined the roster of newlyweds. But after Annie posted a goodbye message on Instagram, fans are wondering what David and Annie are doing post-90 Day Fiancé.

In her July 21 Instagram post, Annie seemed to hint that she and David would no longer be doing the show. She thanked fans for watching her and David’s story on both shows and said, "Tomorrow night is my last episode, I'm so ready for it." She also thanked her fans and followers for their continued support and sent her own well wishes to them despite apparently leaving the show now that the season is officially over. After posting the selfie and caption, fans were quick to urge Annie to reconsider staying on with David so that viewers could continue to watch their story play out, but this could be the end of the couple.

David and Annie originally appeared on a Season 5 episode of 90 Day Fiancé before they were brought into the fold as part of the main cast for Season 5 of 90 Day Fiancé: Happily Ever After?, so they’ve only been part of the cast for one season. And unlike the original show, the spin-off typically includes the same stars each season, as some of the couples have lasted two or three seasons on the show. As of right now, however, it looks like Annie doesn't want to return next season.

The couple's financial woes have been at the forefront of Annie and David’s story on 90 Day Fiancé as well as the spin-off show. When David was courting her in Thailand, where they met while he was on a trip away from the United States, he’d made promises to her about bringing her back to the U.S. and taking care of her. Instead of that happening, however, viewers have seen David’s struggles to find work and as a result, their relationship troubles have stemmed from their financial difficulties.

When fans initially met the couple during their engagement, David's credit card was declined when she tried to buy a wedding dress, just to give you an idea of how early these issues began for them. During Season 3 of 90 Day Fiancé: Happily Ever After?, there was one point where Annie became frustrated with David for not only turning down a job from his friend, but for failing to find them a proper home before his friend had to ask them to move out of his firehouse.

"Sometimes, I just think in my mind, why am I still with this guy?" Annie said in one of her talking head interviews on the show this season. "I do love David a lot, but I’m still [not] sure if love is enough. Right now, I think he’s trying very hard. It’s not easy for him, and I understand that."

Annie’s dreams, as she laid out on 90 Day Fiancé, were to start a new life in America with a house, husband, car, and eventually children. So far, it's been a struggle to attain much of that, except of course a husband. Despite the problems that viewers have seen the couple go through on both shows, judging by their photos on Instagram, Annie and David are still together, but may have made a mutual decision to step away from the show next season.

TLC hasn't yet released an official announcement about it either way, but I think the couple has a lot more important things in their life to worry about right now apart from being available to film a reality TV show.