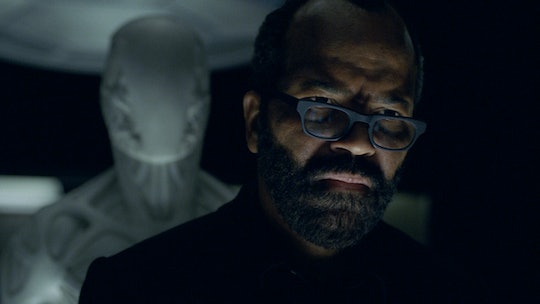 Trailers for Season 2 of Westworld showed the behind-the-scenes operations being manned by strange, seemingly unfinished hosts. Featureless and white, their muscular systems were on display but they lacked skin, hair, or any other identifying features. They were dropping human technicians into the milk-like substance hosts are made from, so apparently they're as on-board with the robot rebellion as more familiar hosts. But what are drone hosts on Westworld? That's what the unfinished androids are called, but what is their purpose and where did they come from?

Showrunners Jonathan Nolan and Lisa Joy shed a little light on the creatures in an interview with Entertainment Weekly. Viewers only saw parts of Westworld in Season 1: the various departments that created and maintained the hosts, the writers who came up with the stories, and the vast park itself. But the ever-encroaching corporate side of Westworld is still underdeveloped despite how much of an impact it has on every aspect of the park. But that will change in Season 2, particularly as Bernard delves deeper into the mysteries Westworld has to offer. It's hiding more secrets than anyone could have predicted (even with all those fan theories floating around). The drone hosts tie into the shadowy Delos corporation and what they use the park for.

Nolan didn't share many details about the drone hosts, but he did hint at how they fit into the broader narrative. He told EW:

The drone hosts relate to the corporation's secret project which is hidden in plain sight in this park. As we talked about in the pilot, the park is one thing for the guests, and it's another thing for its shareholders and management — something completely different. We've used the Google analogy — for consumers, it's for search and email, yet for the company, it's for advertising. There is an agenda here that Delos has undertaken for a very long time. As Bernard is making his way through the wreckage of the fallout from the first season, he's discovering things about the park that even he doesn't know and coming upon creatures like the drone host.

It seems viewers will have to wait until Season 2's April 22 premiere to totally understand what the drone hosts are, but some theories can be extrapolated from what Nolan said — and the specific words he used. "Drones" can refer to one of two things in the real world outside of Westworld: a remote-controlled aircraft without a pilot, or a male bee in a colony that fertilizes the queen but otherwise does not work. There's also the metaphorical connotation of "mindless drones" as people without a purpose, who don't do anything of value — like zombies.

Based on that, one might assume that drone hosts were created to carry out a specific purpose for Delos but don't have the human-like qualities viewers have come to expect from hosts. They have no personalities or feelings or minds of their own; instead they exist to follow predetermined orders, possibly given to them from a remote distance. Perhaps corporate programs the drone hosts from outside of the park and uses them to accomplish specific tasks within its boundaries. But that's just speculation.

In Season 1, Charlotte was using regular hosts to smuggle information out of Westworld, but it's unclear why she would need to do that with corporate-controlled drone hosts hidden within the park. If Charlotte doesn't know about the drone hosts, then it definitely raises some questions about her position in Delos and what the company is really doing with the park. Whatever it is, the drone hosts seem to be a big part of it.