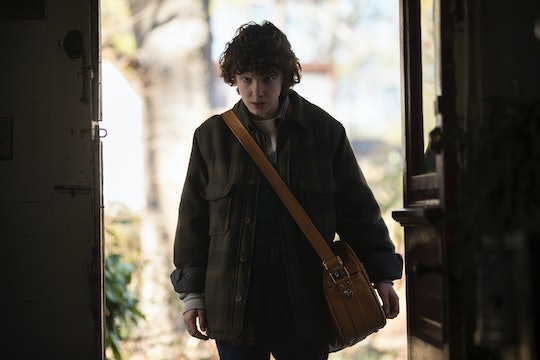 Eleven's Powers Are Stronger Than Ever In 'Stranger Things' Season 2

Warning: spoilers from Episode 9 ahead! Many things have changed about Eleven in the second season of Stranger Things, and I don't mean the adorable curly hairdo or the newfound love of daytime soaps. She seems stronger than ever when it comes to using her abilities, especially once she learned to harness them by channeling her emotions. So what are Eleven's powers in Stranger Things Season 2? They haven't change entirely from the first season, but they do seem to have grown.

Eleven's psionic abilities have always been impressive but practice makes perfect, and the year between seasons seemed to have given her a lot of time to practice. After the experiments her mother underwent at Hawkins Labs, Eleven was born with telekinesis, which meant she could move things with her mind. When she was upset or angry, her strength increased and she could even send a van flying through the air. But her powers didn't stop there. She could exert control over living creatures too, like when she made the school bully wet himself or the time she psychically killed the guards at the lab when they tried to force her into solitary confinement.

Eleven also possesses the ability to utilize television or radio waves to spy on people from vast distances away. Whenever she was placed into a sensory deprivation tank, she could transport herself to a black void space that allowed her to see people in different locations. Hawkins became linked to the Upside Down because Eleven was in that void when she accidentally came across a Demogorgon and opened a rift to another dimension.

In Stranger Things Season 2, Eleven still possesses all of those abilities, but she knows how to use them much better and they seem to have less of a strain on her, though she still gets a nosebleed every time. She can use her telekinesis for common, everyday tasks like unlocking doors or cleaning up. She still becomes more powerful when in an emotionally fraught situation and sometimes loses control, but nevertheless appears to have a much better handle on things.

She no longer needs to be submerged in an isolation tank to use her power to see other people, either. All Eleven needs is a blindfold and access to electronics; in that way, she was able to check on Mike throughout Season 2 while forbidden to see him. She can also trace people using the same method, even if they are people she's never met before. She found another girl who had grown up in Hawkins Labs with only a photograph.

In the Season 2 finale, Eleven faced her biggest challenge yet. To save the town from the encroaching Shadow Monster and its army of Demogorgon dogs, she had to close the rift that she had opened in the first place. Located in the lab, the rift was a huge portal that almost looked like interwoven threads of flesh or muscle; it seemed like it was alive, and there was a shadowy figure floating behind it trying to get out. Eleven's abilities meant she was the only one capable of closing it, but it wouldn't be easy.

She had to pour everything she had into knitting the rift shut, and it took a greater toll on her than usual. Her nose bled from both nostrils instead of one and Eleven actually became airborne with the force of the energy she was exerting. Presumably she was using her telekinesis to bring the two edges of the rift together, so it wasn't a new power; Eleven just found a way to use her existing powers to greater effect.

Considering how quickly Eleven's abilities grew in just a year, she might be even more powerful when Stranger Things returns for Season 3.