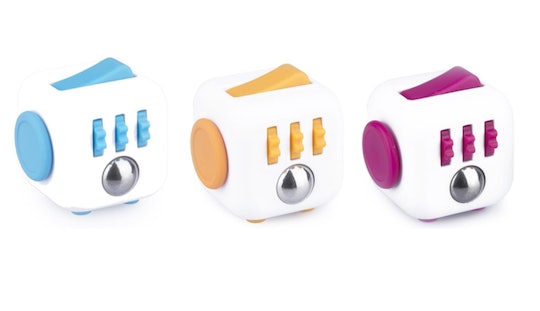 If You Love Fidget Spinners, Meet It's Bonafide Cousin, The Fidget Cube

If your child has already grown bored of their fidget spinner, there is already a new gadget to replace them. Using the same concept of keeping fingers busy to capture excess energy, Fidget Cubes are a hot toy for 2017 and a must-have for your shopping list this holiday season.

Fidget cubes are described by e-commerce gadget store The Fowndry as a "one-stop ‘fidget toolbox'' that 'has little doodahs for you to play with on each of its six sides: a rocker switch, gears and a rolling ball, a small joystick, 5 buttons, a spinning disc and — as a tribute to the worry beads of old — a ‘rubbing stone’, so you can click, glide, flip, breathe, roll and spin." The idea is that by enhancing the senses and providing a tactile outlet, the user can relieve stress and concentrate better.

The Fidget Cube had humble origins, invented by Matthew and Mark McLanahan of Antsy Labs and becoming one of the highest-funded Kickstarter campaigns in history, bringing in early $6.5 million in funding from over 150,000 backers. Their original version is available in eight colors directly from the creator ($10, Antsy Labs).

Since one option is never enough, depending on who your child's favorite super hero is, you can probably find a Marvel-themed version to match from a stable of characters including Captain America, Batman, The Hulk, Spiderman, and Iron Man ($14, The Foundry). Not to be outdone, DC Comics added some of their crime-fighting heroes, like Wonder Woman and Batman. You can find these DC Comics Fidget Cubes ($25) on Amazon but their inventory is limited, with some superheroes temporarily sold out, which makes us further believe that these highly addictive toys are a coveted stocking stuffer or a one night of Chanukah gift.

The bloggers are buzzing about them. Adults, who previously only had pen clicking and leg shaking to get their nervous energy out, are loving it. The Domestic Geek supported the fidget cube's Kickstarter campaign and was waiting for it with jittery anticipation (jitters she hoped the fidget cube would calm). Digital Mom Blog found the cubes to be calming, particularly for her child with A.D.H.D. and her other child with a sensory processing disorder. She thought they were great for school and especially for fidgety kids in the car, when you don't want to hand them an iPad in exchange for their silence.

Which brings us to the "do fidget cubes belong is school" controversy. According to PJ Media, there have been studies that have shown that children who play with fidget objects at their desks are able to focus better in school, including a 2005 study done at the University of Hertfordshire. That study showed that, "children who fidget with their hands in the class learn more quickly than those who stay still. Use of "manipulating objects," researchers said, 'is known to activate the brain.'" Dr. Karen Pine is quoted by PJ Media as saying, ""Therefore, far from restricting children from moving their hands, if teachers encouraged more fidgeting in the class they might find children actually learn more."

According to the Chicago Tribune, some teachers are frustrated by the presence of the cubes and their older cousin, the fidget spinner, in their classroom.

"Frankly, we've found the fidgets were having the opposite effect of what they advertise," said Kate Ellison, principal of Washington Elementary School in Evanston said to the Tribune. "Kids are trading them or spinning them instead of writing." Ellison had her school ban the fidget spinners, substituting different outlets such as velcro, squeeze balls and rubber bands.

Schools are banishing them? That only makes them an even hotter commodity.

If you want to pick these handheld gadgets up for your kids, adults, or even yourself, we suggest ordering them early as supplies this year might be limited, especially if you are hoping for a superhero cube. And a small reminder that these are not meant for children under three years old.