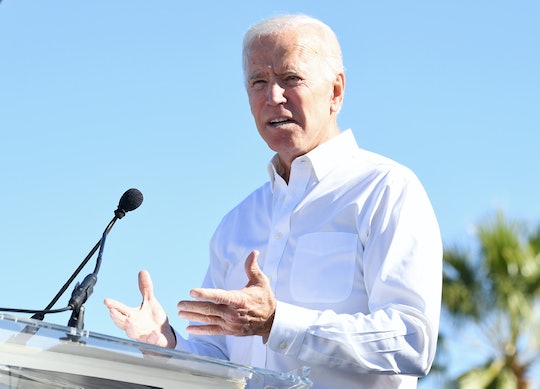 Joe Biden is officially running for President of the United States in 2020. On Thursday, the former vice president who served in office from 2008 to 2016 alongside President Barack Obama announced that he would be challenging President Donald Trump in the upcoming presidential election. Sure, people are familiar with him, but they might not be as familiar with where he stands on issues. So it's only fair for people to wonder, for example, what Joe Biden's views on health care are.

One of the highlights of Obama's presidency was when he signed the Affordable Care Act into a law in March 2010. The ACA was signed with the goal to make health care affordable to more people, expand the Medicaid program, and expand the coverage of health care programs. At the time, it was seen as a victory for Democrats, and Biden called it a "big f—g deal" in front of cameras (and microphones), according to USA Today.

In 2013, Biden was instrumental in educating people to make sure they knew what options they had because of the ACA, according to HuffPost, after polls showed that people did not know about the benefits of the ACA.

Giving everyone access to health care (especially affordable health care) is still something that Biden supports to this day, according to The New York Times. In 2017, he penned an op-ed for The Washington Post in which he summed up his thoughts on the subject. "Let's again make the commitment that in America, health care is a right for all, not a privilege for the wealthy," he wrote.

At the same time, it sounds like he's also aware that the current health care system isn't the best program ever, and is aware that there could be some changes made, but knows that access to health care is more important. "The ACA isn't perfect, but the choices we made when designing a law flowed from a commitment to provide the best possible care to the most people," he added in his op-ed.

Biden is against cutting Medicaid, which is something he warned Republicans from doing in that same 2017 op-ed. But, it's a little unclear where Biden stands on "Medicare for all", according to The New York Times. Medicare-for-all is a health care stance popular among Democrats that promises all voters will be insured or get insurance through work, according to Vox. But Biden's stances on this and health care will become more apparent as he does more more campaigning throughout the year in time for the 2020 Presidential Election.

So far, Biden's stance on health care has had little change since his time as vice president. In 2017, Biden said at a campaign event that the ACA gave people a "peace of mind," according to The Hill, and his campaign website, he reiterates what he has stated before. He won't let the ACA disappear on his watch. Biden wrote:

We should defend and build upon the Affordable Care Act to ensure every American has access to quality, affordable health care. And, we should dedicate the full force of our nation's expertise and resources to tackle our greatest public health care challenges, including cancer, opioid addiction, and mental health.

But these ideas are still young. His thoughts about health care will become more evident as he spends more time on the campaign trail.