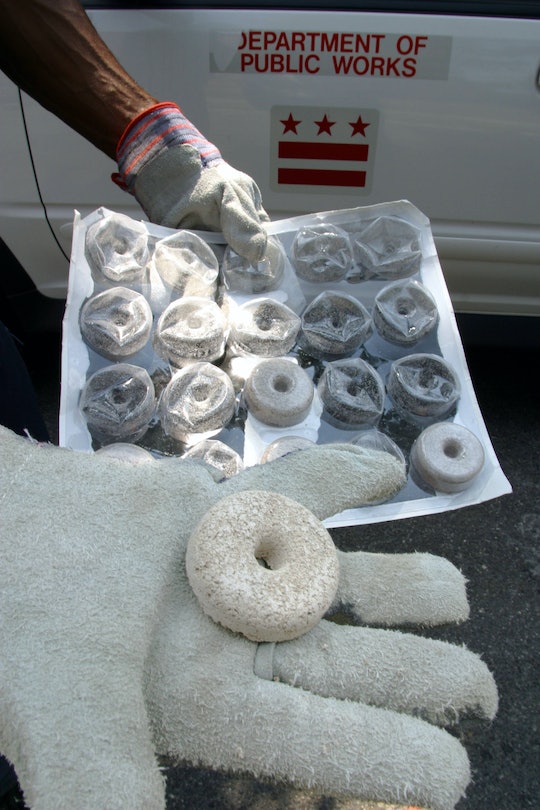 What Are Larvicide Tablets? They Could Help New Yorkers Fight Zika This Summer

Although Congress is still disputing emergency Zika funding, many city health departments are already prepping patients, clinics, and possible travelers to Zika infected areas with packages stuffed with condoms, insect repellant, and larvicide tablets. But wait. What are larvicide tablets and how do I get some?

There's no vaccine or treatment for Zika right now, but larvicide tablets might help ease the threat on their own. Larvicide tablets, palm-sized cakes that are intended to treat standing water, kill mosquitos when they're still little baby bugs in their weird egg shells, waiting to grow up and become their true, pesky selves. The tablets, according to the EPA, are a pretty safe insecticide to be used in standing water, a known breeding zone, and give the little buggers trouble digesting food. And then they don't get hungry and they die of starvation and we all live itch and Zika-free forever.

I'm of a rare group of people that doesn't get icked out by bugs (my dream job, outfitted with a net and lots of un-ironic mason jars from my grandmother's kitchen, was to be an entomologist. I was weird. ), so I feel sort of bad for the little monsters. But as a grown up living in a possible Zika mosquito infected world — I say drop those tablets like it's hot. (Because it is actually hot and those mosquitos will do anything to keep their heads up.)

It's not a great solution to the overall problem, but in places like New York City, where there are many residents traveling this summer to visit family in the Dominican Republic or Puerto Rico, doctors are making sure to ask patients about their travel plans and prep them on the risks, especially if those patients are pregnant women. The Zika mosquito isn't native to New York, but all of the cases reported so far in the area have been travel related, so this approach makes sense.

On Tuesday, a baby in New Jersey was born with microcephaly to a mother who had traveled to Honduras. But just because it's a long shot for the Aedes aegypti, mosquito to make it all the way up north doesn't mean that cheap air travel and summer plans won't bring the virus back home, where those same mosquitos will nosh on your Zika infected blood and pass it around the city like the plague. In major cities like New York and Los Angeles, it's up to city health officials to educate patients on the risks of sexual transmission and protecting themselves during travel, so every little bit helps.

It's not a perfect solution, but larvicide tablets for mosquito ridden areas seem to be an effective way to battle little mosquitoes and give everyone some peace of mind.