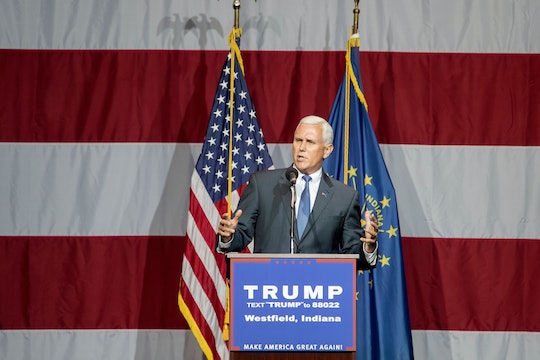 What Are Mike Pence's Views On Abortion? The Governor Has Strong Feelings

With the Republican National Convention less than a week away, the big quesiton on many minds is who will Donal Trump choose as his running mate. Today, it was widely reported that the republican party nominee would be choosing Indiana Governor Mike Pence to serve as his vice president, should he be elected into office. And with that rumor comes a lot of questions about Pence, from who is his wife to what are Mike Pence's views on abortion. Though the former is more out of curiosity, the answer to the ladder could have an affect on how people vote come November.

Given Pence's party alignment, it should come as no surprise that the governor is strongly pro-life. Since being elected into office in 2013, Pence has spent the better part of his term trying to amend abortion laws in Indiana. His mission came to head this March when Pence signed a new abortion bill into law, amplifying the already strict abortion laws in the state. The bill, referred to as House Bill 1137, passed both chambers of the Republican-controlled General Assembly with large majorities.

In short, the House Bill 1137 limits women's access to abortion in the state and restricts doctors' ability to help those seeking an abortion. Some of the more standout regulations from the bill, which can be found on the Indiana General Assembly's website include:

Provides for disciplinary sanctions and civil liability for wrongful death if a person knowingly or intentionally performs a sex selective abortion or an abortion conducted because of a diagnosis or potential diagnosis of Down syndrome or any other disability.

Provides that a written agreement between a physician performing an abortion and a physician who has written admitting privileges at a hospital in the county or contiguous county concerning the management of possible complications of the services must be renewed annually.

Makes it a Level 5 felony to unlawfully: (1) transfer; and (2) collect fetal tissue. Establishes an exemption for the criminal penalty of unlawful use of an embryo if the transfer or receipt of a fetus was requested in writing by a biological parent for purposes of an autopsy.

According to The New York Times, Pence said he signed the bill because, "a society can be judged by how it deals with its most vulnerable — the aged, the infirm, the disabled and the unborn.”

The bill sparked a bit of outrage from opponents, who argue that the new laws force women to endure potentially high risk pregnancies. In an effort to shock (and potentially scare) Pence into reversing the bill, the group "Periods For Pence" was formed. With more than 51,000 members to day, the group features graphic stories about women's periods in an effort to drive home the fact that the government does not and should not have a say in what a woman does to her body.

It is not clear yet how Pence's views will line up with those of Trump, who has been inconsistent with his opinion on abortion. According to The New York Times, Trump has offered at least five different opinions on abortion, ranging from pro-choice views in 1999 to his most recent views that we should protect the unborn. Should Trump choose Pence as his running mate, it'll be interesting to see how this issue plays out.