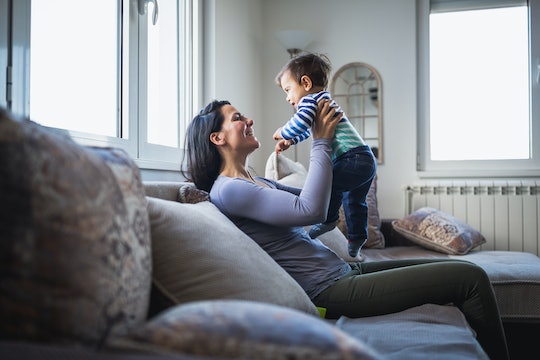 One of the most wonderful things about being pregnant is being able to feel your baby kick. There is truly nothing else like it, and it's something you'll miss even if you didn't particularly love being pregnant. But imagine if you felt that kicking sensation after your baby was born? Imagine you're laying in bed, staring at your newborn, and suddenly, you feel that familiar flutter like a phantom baby kick. It's unexpected, it's confusing, and it honestly might even be a little scary. But don't panic. Search any motherhood message board or Facebook group and you'll find several moms talking about this phenomenon.

First, it's important to point out that feeling a phantom baby kick every once in a while is not the same thing as something like pseudocyesis, which is a condition when a woman who is not pregnant believes she is, to the point where she starts showing physical signs of being pregnant. Phantom baby kicks are different, there just hasn't been much research done on them, so there's not a ton of information on them.

In 2019, researchers at Monash University in Australia surveyed 197 women who had previously been pregnant about their experience with phantom kicks. The report stated that while 40% of women in their sample experienced phantom kicks after their first pregnancy, this is something that has never been reported in scientific literature. The women who took part in the survey described the kicks as "convincing," "real kicks," or "flutters." Some women felt phantom kicks for up to 28 years after having a baby!

Why do some women feel this sensation and others never do? It's kind of hard to say, but one thing is for sure: you're not actually feeling a baby kick, you're feeling something else, and you're perceiving it as a baby kick. Dr. Jill Hechtman, medical director of Tampa Obstetrics, tells Romper, "[Phantom baby kicks] are a perception but not actually physically real." That's especially true if you just had a baby — you remember that feeling well, and you probably miss it a little bit. If you feel something similar to a kick, your brain is automatically going to think it was a kick.

So what causes that feeling? Doctors really aren't sure. Dr. Hechtman says that it could be from gas, which is commonly felt after giving birth (and remember, when you're pregnant and you first start feeling those little fluttery kicks, they're easily confused for gas). Houston, Texas-based gynecologist Dr. Tamika Cross tells Romper, "The phantom fetal movement is thought to actually be a result of intestinal peristalsis or contractions of the abdominal wall muscles." Basically, those "kicks" are more likely uterine contractions, or your uterus shifting back into place as things move around internally after giving birth. There's a lot happening in there, and you're bound to feel something as things move around.

If you do feel these phantom baby kicks, don't stress: nothing weird is going on, and you can actually think of it as just kind of a nice memory. "They don't mean anything," says Dr. Hechtman. "It is nice, however, to remember the feeling of being pregnant, and the joy it brings."