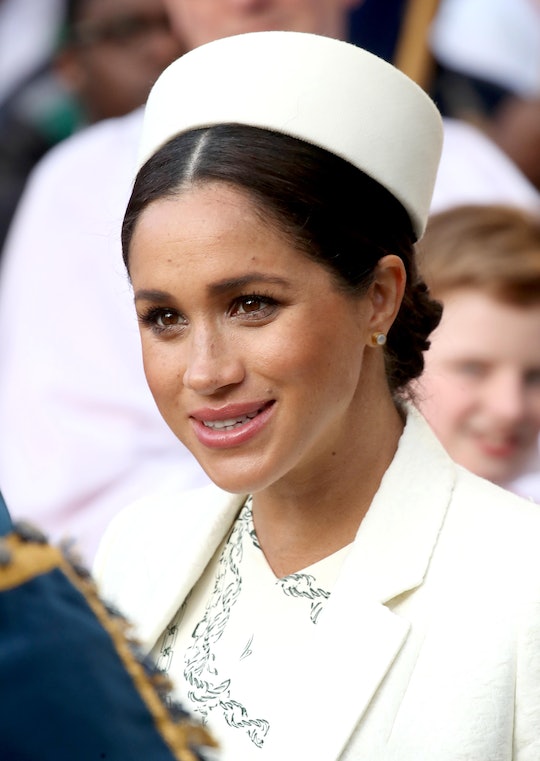 Pregnancy changes so many things in the body, and this goes for the lips as well. In some cases, a person's lips may appear to grow larger while they're expecting. So what are pregnancy lips, and how do they form? There's a reason for this pronounced pout, and it's totally normal and natural.

More Like This
50 Quotes About Pregnancy, From The Heartfelt To The Hilarious
Your Guide To Hiking During Pregnancy
Everything You Need To Know About Gestational Diabetes
Pool Cannonballs Are Pretty Much A No-Go During Pregnancy

For the most part, doctors can explain the reasons why some people experience pregnancy lips. "It’s absolutely true that [pregnancy] can cause swelling of the lips. It is a real phenomenon," said Dr. Jodie Silleri, general practitioner and cosmetic physician in Mamma Mia. It's just another side effect of the way swelling can affect the pregnant body. "There is definitely some truth to as your belly grows so can your lips," said Dr. Sherry A. Ross, women’s health expert, in People. "Swelling is a normal part of pregnancy and it happens in just about every part of your body including your lips." However, if you're wondering whether the swelling that can affect the hands, feet, and even lips during pregnancy can have lasting effects, you don't have to worry: They typically go back to normal a few months after delivery, as Dr. Ross further explained.

The hands, feet, face, and legs are subject to swelling during pregnancy for a variety of factors, according to UnityPoint Health. Fluid retention from hormonal changes, as well as the production of more blood to support the growing baby, can make it easy for areas of the body to swell, as the site further explained. For the most part, larger lips are a perfectly normal side effect of growing a baby. However, if enlarged lips (or anything else) about pregnancy gives you cause for concern, then speak with your doctor for advice.

There's no reason to feel alone with this condition, either — plenty of celebrities have spoken openly about their experiences with pregnancy lips. For example, Khloé Kardashian described her pregnancy lips as "massive" in a post to her Instagram Stories, according to Cosmopolitan. And her tweet above proves she still can't believe how different her lips looked during pregnancy. And back in 2015, sister Kim Kardashian's own set of pregnancy lips caused controversy with people speculating that they were the result of lip injections, according to Us. Even the queen herself, Beyoncé, experienced larger lips while carrying twins Rumi and Sir, according to Glamour. When people on the internet accused her of getting lip injections, Beyoncé's representative Yvette Noel-Schure shut down that line of thinking very quickly, according to GossipCop. "What do you know about the effects of pregnancy on a woman’s entire body?" she wrote in a statement provided to GossipCop addressing the critics. "Please tell me. Did you know that in addition to weight gain there is often a dramatic change in the blood flow in the system and increased fluid causing swelling?" Team Bey was not having any of it.

Even the Duchess of Sussex, Meghan Markle seems to have been bitten by the pregnancy lip bug. Though her lips have not been addressed directly, it's likely that she, like many other women carrying have a baby, is just experiencing this temporary, totally normal side effect of expecting. One thing's for sure: She's in good company.