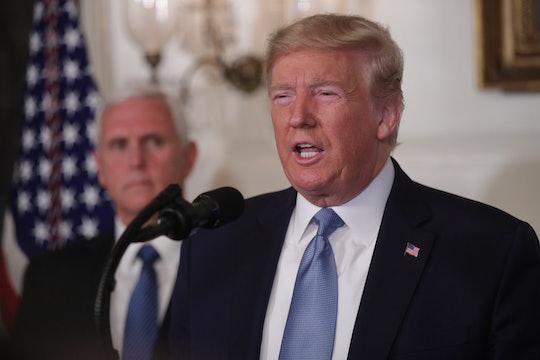 In the wake of two deadly mass shootings, President Donald Trump called on the nation to condemn "racism and white supremacy" in a speech delivered Monday from the White House. In characterizing the recent mass shootings as "barbaric slaughters," Trump said the nation must seek "real, bipartisan solutions." But what are "red flag" laws? Trump called for their implementation Monday.

"In one voice, our nation must condemn racism, bigotry and white supremacy," Trump said. "These sinister ideologies must be defeated." He characterized mass shootings that had killed at least 29 people in Texas and Ohio over the weekend as "barbaric slaughters" and "an assault upon our communities, an attack upon our nation, and a crime against all of humanity," blaming factors like "gruesome" video games, mental illness, and the internet, as CNN reported, though he did not acknowledge his own history of hateful rhetoric.

The president then went on to argue that "we can and will stop this evil contagion," stressing that Americans "cannot allow ourselves to feel powerless." He called on Congress to seek what he called "real, bipartisan solutions" that would "truly make America safer and better for all."

Among his proposed actions was a call for "red flag" laws, which the president said would enable authorities to restrict the access an individual believed to be a public safety risk has to firearms. "We must make sure that those judged to pose a grave risk to public safety do not have access to firearms, and that if they do, those firearms can be taken through rapid due process," the president said. "That is why I have called for red flag laws, also known as extreme risk protection orders."

Although the details of "red flag" laws vary from state to state, they generally provide immediate family members and law enforcement authorities with a means of petitioning to have an individual's guns, and ability to purchase a firearm, temporarily removed if they are believed to pose a safety risk. The gun control advocacy group Everytown For Gun Safety describes such legislation as laws that give "family members and law enforcement a way to intervene before warning signs escalate into tragedies."

Critics of "red flag" laws, however, have argued that they're unconstitutional. In Colorado, for example, a majority of the state's counties opposed a "red flag" law signed by the governor in April. According to CNN, critics there argued the law could result in citizens losing their Second Amendment rights on the basis of a false accusation.

The president's public push for "red flag" laws comes just one day after Ivanka Trump, who along with being Trump's eldest daughter also serves as an advisor to the president, called for the gun control measure in a statement released on Twitter. "Congress should enact Red Flag laws/ Extreme Risk Protection Orders in EVERY state and increase resources dedicated to mental health support," Ivanka wrote Saturday in a tweet promoting Sen. Lindsey Graham support of "red flag" laws.

In a written statement submitted to a Senate Judiciary Committee hearing on "red flag" laws, Graham argued that mass shootings were "examples" of "a failure to identify and lessen risk from individuals who may be showing signs of distress and the willingness to hurt themselves or others." While the issue of gun reform has traditionally been rather divisive, Graham argued that "red flag" laws, which have been backed by both the National Rifle Association (NRA) and gun control advocacy groups, were an area where "bipartisan support could be achieved."

In a statement released Monday, Graham said he appreciated the president's "call to action" and revealed he'd written a bipartisan bill with Democratic Sen. Richard Blumenthal. According to Graham, the bill would create a federal grant program as a means of encouraging states to pass "red flag" laws. If passed, the grant program would give state law enforcement agencies the funds to "hire and consult with mental health professionals to better determine which cases need to be acted upon." He urged both his Republican and Democratic colleagues to join him in "the effort to keep guns out of the hands of dangerous people."