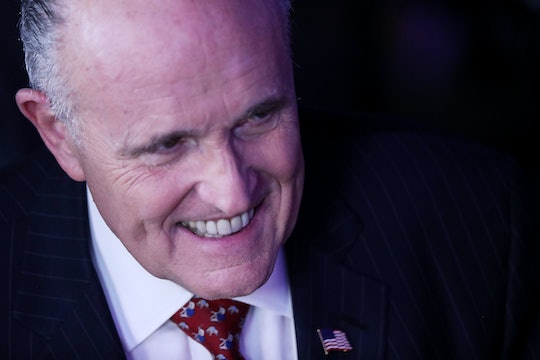 What Are Rudy Giuliani's Foreign Policy Stances? He's Up For A Role In Trump's Cabinet

Former New York City Mayor Rudy Giuliani might be up for Secretary of State in President-elect Donald Trump's administration. So it might be time to get to know what Rudy Giuliani's foreign policy stances are to get a better idea of what kind of relationships and initiatives the administration will be backing. Don't get too attached to this selection yet (fans or haters), Giuliani hasn't actually been appointed and would have to be confirmed before getting the job. Former U.N. ambassador during the George W. Bush administration, John Bolton, is also in the running, so the position is still up for grabs — for now.

Luckily, American voters know a bit about Giuliani because he ran a failed presidential campaign in 2008. He dropped out after the Florida primary in late January 2008, but since he was in the debates, voters got to hear some of his ideas. He also worked in the Justice Department as a staffer. As mayor of New York City during the 9/11 attacks, Giuliani has some experience in homeland security.

He said during the New Hampshire debate in 2008, of his time as mayor of New York City:

I am the only one here who actually has had to face an Islamic terrorist attack. With regard to foreign policy, I’ve negotiated with governments when I was in the Justice Department. I worked on a task force on terrorism in the 1970s." He added, "I have also traveled 91 trips in the last six years, to 35 different countries. And I knew how to take a stand for my country.

Giuliani also spoke at length at the Republican National Convention this summer about not getting out of the Iran nuclear agreement and also reversing Obama administration policies concerning Syria and Libya. But, it was a little tangential and hard to follow — so it might be hard to hold him to those sentiments.

In a 2007 essay for Foreign Affairs, Giuliani wrote an essay about a "realistic peace," largely focused on defeating terrorism on a global level and working with other countries to do so. In fact, a lot of his foreign policy centers around preventing terrorism — but the world has changed a lot since 2007. There's ISIS, to start, and Europe is not as connected as it once was.

At the time, even the conservative blogger James Joyner wrote of Giuliani's essay,

The more I hear and read, though, the more I think Giuliani is either a charlatan or a simpleton. Either he’s lying to us and we therefore have no idea what his foreign policy will be or, worse, this is what he really thinks. Either way, it’s not good.

We still know just as much about "America's mayor" and what he could potentially bring to the State Department — which is not much, minus some ideas that could either be pandering or or actual plans of action.

We do know that his positions are about doing anything possible to stop terrorism, including preventing Muslims from the entering the country, according to an interview with MSNBC last year. In the private sector, Giuliani Partners, his consulting firm, once secured a contract to "fight crime" in Mexico, largely based in surveillance.

In these ways, he is aligned with some of the president-elect's most controversial and severe platforms — closing American borders and taking a hard line abroad. Let's hope that at least before his confirmation, voters get some more concrete ideas about foreign policy from the former mayor, so they at least know what might be coming.