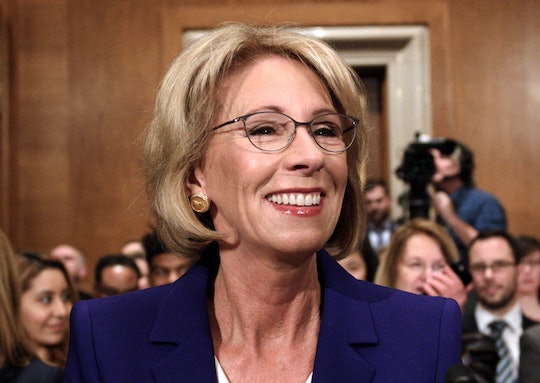 Although issues like America's relationship with Russia and who is or isn't performing at the inauguration this Friday seem to be dominating headlines, there are some domestic policies that might change dramatically under President-elect Donald Trump's administration. And they're sort of more pressing. Just take Trump's nomination of Betsy DeVos to head up the Department of Education. During her hearing on Tuesday, DeVos was questioned about some conflicts of interest that she might have by Democratic senators, but what Americans should be more concerned with is DeVos' stance on school vouchers.

Because she has some very strong ideas about school vouchers. In case you're new to the whole "what the heck is going on with our public system" debate, school vouchers are at the very core of it. Basically, school vouchers are akin to coupons that states like Arkansas, Florida, Georgia, Indiana, Louisiana, Maine, Maryland, Mississippi, North Carolina, Ohio, Oklahoma, Utah, Vermont, Wisconsin, and even Washington, D.C, give to parents who want to send their kids to private, including religiously affiliated, schools, if their public school isn't working for their child.

The voucher help parents pay for it. DeVos has been an advocate for vouchers throughout much of her career, even though they have been proven to be ineffective by researchers and tend to widen the gap between "good" and "bad" public schools.

School voucher programs seem to make sense for many parents — if school districts are failing their children, especially those with special needs — why shouldn't the government help parents give their children the best opportunity possible? It's complicated, especially considering that voucher programs have also been deemed unconstitutional in some states (in Louisiana, the state supreme court deemed vouchers an invalid funding method for local private schools, for example).

Aside from that, what's controversial about DeVos' stance on school vouchers — literally giving parents a way to opt out of the public school system — is that America has a public school system. School vouchers actually take money out of state's public school budgets to send children to private schools, instead of say, investing more money into those same state public schools and making them better by paying teachers more, advocating for more comprehensive curriculums, buying soccer balls and tubas, all of that. For what it's worth, the voucher system has also, for the most part, not worked in other countries.

School vouchers aren't just for elite private schools, either. They also mean the federal government gives states money to pay parents to send children to religious schools, which might violate that whole "separation of church and state" thing that Americans take for granted sometimes.

For better or worse, DeVos would probably be a strong advocate for states to make their own decisions about public education and back any state's right to institute a voucher program. But vouchers privatize education, of all things. It means underfunding the American public school system instead of investing in it. Then again, we have a businessman coming into office — maybe he and his prospective education secretary know something we all don't.