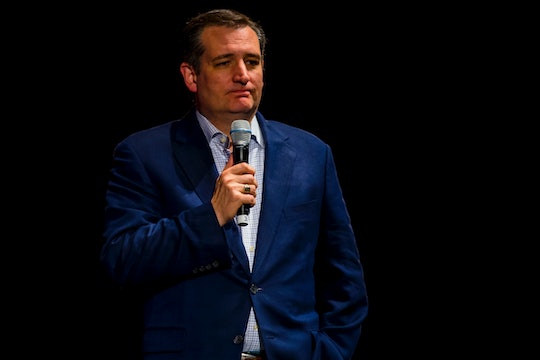 What Are Ted Cruz’s Views On Transgender Issues? Caitlyn Jenner Wants to Be His "Trans Ambassador"

If Texas Sen. Ted Cruz wins the Republican nomination for president, he's already got one volunteer for his cabinet: Caitlyn Jenner. Yes, that Caitlyn Jenner. Arguably one of the most famous transgender people on earth, Jenner said she likes Ted Cruz, thinks he's "very nice," and in fact would be interested in becoming his "trans ambassador," should he get elected, according to Gawker. For those who are unaware of Ted Cruz's views on transgender issues, they are absolutely dismal.

In a November radio interview, Cruz claimed "the federal government is going after school districts, trying to force them to let boys shower with little girls." On the campaign trail this past January, Cruz brought up the issue again, saying that "inflicting [a trans girl] on the teachers is probably better than sticking him in the shower with the teenage girls," according to NBC News. Boy, does he spend a lot of time thinking about teenage girls in showers.

Also in November, CNN reported that Cruz tried to distance anti-abortion advocates from the Colorado Springs Planned Parenthood attack by claiming that the gunman was a "transgendered leftist activist." Two quick points for the senator: one, transgender is not a verb; and two, trans activists aren't known for murdering people while shouting about "baby parts"; they're more into trying not to get killed themselves, parades, picketing, and writing poignant essays on why you shouldn't ask strangers about their genitalia.

Jenner did recognize that Cruz needs help. She mused in the interview, originally conducted by The Advocate, that she'd love to have "all my girls on a trans issues board to advise him on making decisions when it comes to trans issues." She said she'd like to tell the senator, who she once met prior to coming out as transgender, "Ted, love what you’re doing, but here’s what’s going on."

One wonders, though, if Jenner is the right person to do that. A lifelong Republican who led a privileged life, Jenner is only recently learning about trans issues herself, as documented on her TV series, I am Cait. Coming out when she was already a household name has now thrust Jenner suddenly into the role of trans advocate, and some argue that she's far from qualified for the role.

But, then again, maybe Cruz doesn't need an expert on trans issues. Maybe all he needs is someone to explain to him that trans girls aren't actually devious little boys who pretend to be girls in order to sneak a peek at his naked daughters — they're just girls. Surely Jenner is at least qualified for that.