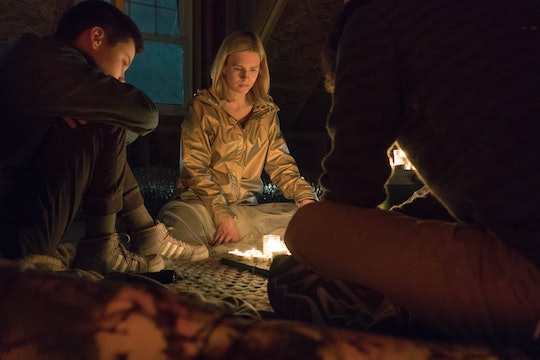 What Are The 5 Movements On 'The OA'? It's How The Hostages Can Escape

(Warning: this post contains spoilers from The OA Episode 5.) Netflix's new mystery, The OA, presents questions about death, different dimensions, and other realities. The main character, Prairie, disappeared seven years go when she ran away from home and was taken by Dr. Hunter Hap, a scientist interested in people who have survived near death experiences. After Prairie was killed (again) by Hap, she came back to life believing there was a way for them all to escape, but she wasn't exactly sure how. Thankfully Scott provided the answer with the five movements, but what are the five movements on The OA?

Before Hap knocked Prairie in the back of the head, killing her, she was blind. However, once she came back from the dead again she could see once more. When she died, she'd found the same woman she met when she died the first time when she was a young child. The woman had Prairie eat a bird that gave her knowledge and a movement. Prairie than instructed Homer to eat a living creature when he died again so that when he awoke he would have his own movement. Later, when Hap accidentally killed Scott during an experiment, Homer and Prairie did their two movements together until Scott was healed, reviving him, and when he came back he was able to explain the five movements.

However, fans know that the hostages did get the last movement somehow because Prairie is able to teach her new group of friends the five movements. So what went wrong with the hostages plan and will Prairie be able to save them now? Fans will just have to keep watching to find out.