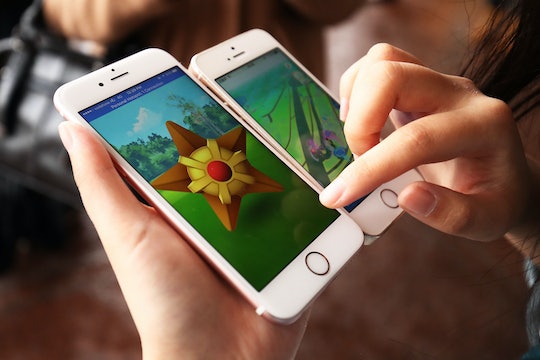 What Are The Blue & Red Poke Balls On Pokemon Go? They'll Help You Catch Rarer Pokemon

Despite reports of injuries and foul play, the "Pokemon Go" craze is still going strong. So much of its appeal is the way the game melds reality with the world of Pokemon, all through a player's handheld, geo-tracking phone. But, other aspects of the game are not so intuitive. Tracking Pokemon can be difficult and learning how to catch them can be even harder. What are the blue and red Poke Balls on "Pokemon Go"? It can get confusing.

Red Poke Balls are pretty iconic, and that's because they are the standard tool with which players, or, as they are known in "Pokemon Go", trainers catch their creatures. When trainers sign on to the game for the first time, they are automatically given 50 Poke Balls, according to Lifehacker. But, as they soon find out, once trainers take to the streets and start slinging Poke Balls, those little red doozies can run out pretty quickly. Why? Well, to catch Pokemon, which is, in essence, the point of the game, one has to throw Poke Balls at their target until they get it just right and "capture" the Pokemon.

But, trainers running low on supplies should not fret. Poke Stops are scattered throughout the "augmented reality" of the game (they are indicated by blue markings), according to the Chicago Tribune. Trainers are at an advantage if they live in an urban area; in cities, Poke Stops are very common. If they live in more rural parts of the world, tracking down Poke Stops may take more of a trek, but it may be worth it. At these "Pokemon Go" meccas, trainers can restock their supplies. If the Poke Stop appears to be low on tools, don't worry. Every so often, they refresh their supplies, so leisurely trainers can hang out and reap the benefits over and over again.

As trainers level up in the game, they will be able to move on from the standard red Poke Balls to the more effective, more advanced blue versions. According to GameZebo, the more time you spend playing "Pokemon Go," the more opportunities you'll have to level up — it makes sense. The blue Poke Balls make throws more effective and more accurate, but they are also much more valuable. As trainers try for rarer and stronger Pokemon, the powerful blue Poke Balls become indispensable. Though "Pokemon Go" is just a game, players can use real-world money to enhance their experience. According to the game designers at Niantic, Poke Coins can be used to buy more Poke Balls, of both colors, to fast-track the game.