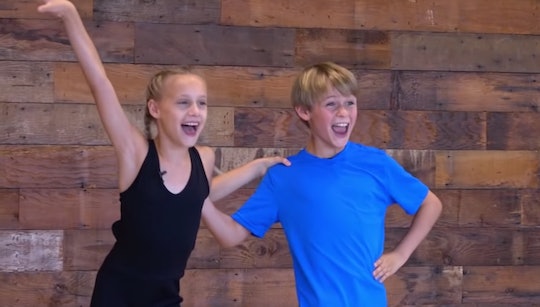 The 'DWTS: Juniors' Kids' Practice Schedules Seem Like A Lot To Balance

The DWTS franchise's latest spinoff will premiere on ABC on Sunday, Oct. 7 at 8:00 ET. Even though the debut is more than a week away, the contestants (along with their dance partners and adult mentors) have already been hard at work in the dance studio. In a trailer the show posted on YouTube introducing fans to the show's young contestants, all 12 couples are shown rehearsing under the tutelage of their mentors, who are all DWTS pros or troupe members, according to ET Online.

Based on the video, the mentors have already choreographed routines and taught them to the kids, so each couple will have a full routine to show the live audience during the premiere. That being said, it's unclear exactly what the kids' practice schedules have been like thus far. But if their schedules wind up being anything like the adults of Dancing with the Stars, they will be jam packed.

When ice skater Nancy Kerrigan competed on DWTS in 2017, she blogged about each week of the competition for Team USA's website. In her blog post documenting the week she was eliminated, which was the sixth week of the season, Nancy wrote that she had four routines to learn for the show. She also had to become familiar with the cha-cha, rumba, and jive for a challenge, so her partner spent time teaching her about the dance forms. Then, on top of a busy week rehearsing all of that, Nancy explained that Saturday, Sunday, and Monday (the shows are Monday night) are the most hectic. "From Saturday morning through Monday night, it is non-stop. I’m not expecting this weekend to be any different," she wrote.

Dancing with the Stars: Juniors will air on Sunday nights, so if the kids' schedules follows that of the adults, Friday, Saturday, and Sunday will be their busiest days.

Snowboarder Amy Purdy, who competed on DWTS in 2014, explained the show's schedule in an interview with The Los Angeles Times. "Everyone is dancing every day, building right up until Mondays/show days, when you arrive on the set at about 7 a.m. and you are there all day and all night," she told the newspaper. "Then last night we had dance practice after the show until midnight. Then we all start our routines for next week today."

Even though kids often have boundless energy, picking up a full-time job on Dancing with the Stars: Juniors on top of school and their careers (the season features young actors, a professional skateboarder, a chef, and more, according to ABC) sounds absolutely exhausting. Not to mention, it wouldn't leave much time to focus on their studies. Hopefully once the show premieres next month, fans will get a more detailed look into the competitors' practice schedules.