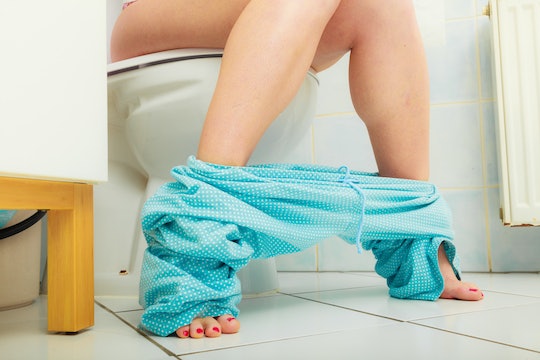 What Are The Different Stages Of Cervical Mucus? Science Explains

Your vagina is like a hard working factory with all its goings on. It not only alters itself to have a baby, but the very fluid that coats the walls of your vagina also changes itself to adapt to the needs of your cycle. The shifts in this mucus are reasonably predictable and you've probably noticed how your cervical mucus changes as you're trying to conceive. But what are the different stages of cervical mucus? How can you use it to tell if you're pregnant, ovulating, or expecting your period?

Many women monitor their cervical mucus to determine when they're fertile, either because they're trying to get pregnant, or because they're actively trying to avoid pregnancy and they're relying on the natural family planning (NFP) method. Cervical mucus is also a good indicator of the health and balance of the flora in your vagina, as it is upset and changed with bacterial overgrowth and yeast.

Your mucus goes through a gradual process of shifting qualities throughout your cycle, ranging from nearly dry to is my vagina making an omelet? Lather, rinse, repeat. Each stage has its own biological purpose. While a slippery egg-white mucus seems like something that should be avoided, it's actually the best mucus for accepting your partner's sperm, according to the University of North Carolina Medical School (UNCMS). That slippery texture is teeming with the proper hydrogen ion concentration and sperm-friendly pH balance to support the semen as it makes its way to the egg.

What are the different stages of cervical mucus other than just fertile or infertile? UNCMS noted that your body's base line mucus is also its least fertile. Your cervical mucus just before your period, during your period, and just after your period is almost non-existent. Your vagina may be reasonably dry, but shouldn't be uncomfortably so. Because your body has just been shedding blood, it didn't require the moisture and maintenance of the cervical fluid. (This also explains why it hurts like a freaking mother to pull out a dry tampon. Seriously, have you done it? It's like you've cleaned your vagina with a toilet brush.) There is just enough mucus that your mucosal tissue isn't sticking together like fly paper.

During your period of low fertility, your mucus isn't apparent, but it's slightly slipperier in your downtown. Much like black ice on the road, you can't see it, but you can feel the slickness. According to Planned Parenthood, it might also be slightly sticky in quality, preparing for the big show of cervical mucus — fertile mucus.

The next stage is cloudy mucus. According to UNCMS, your mucus will be cloudy, non-elastic, and may be whitish or slightly yellowish in color. This is the pre-fertility mucus. Not quite ready for the baby parade, but getting there. You'll probably notice this mucus when you wipe or as residue in your panties. Damp, but not distinct.

Next in line is the big deal — fertile cervical mucus, according to Planned Parenthood. It's wet, elastic, clear, and plentiful. You'll definitely notice this stuff as you ovulate. It's close to the consistency of egg whites, and it's exactly the mucus you want to look for if you're trying to conceive.

After that, your mucus goes in the reverse order. It will turn cloudy, then sticky, then back to barely noticeable. While there are aberrations in this pattern, it's generally a reliable rubric. The other major changes to your cervical mucus happen when you are pregnant or menopausal. During your pregnancy, you may notice that you have a lot of vaginal discharge. According to Healthline, it's called leukorrhea, and it's mild smelling, thin, and white or yellowish. It's so abundant because of the changes to your cervix during pregnancy, and may be so heavy that you'll require a pantyliner at some point.

During perimenopause and menopause, it changes once again due to fluctuating hormones and their impact on the mucosal tissue and cervix.

Cervical mucus is also affected by bacteria and yeast, so if you notice a significant shift in the texture, smell, or quality of your mucus, this may be the culprit and in need of further investigation. Our bodies do incredible things, and this is just a small part of that puzzle, but it's fairly amazing how it's able to change so frequently and with such spectacular results, isn't it? Who knew mucus would be so interesting.