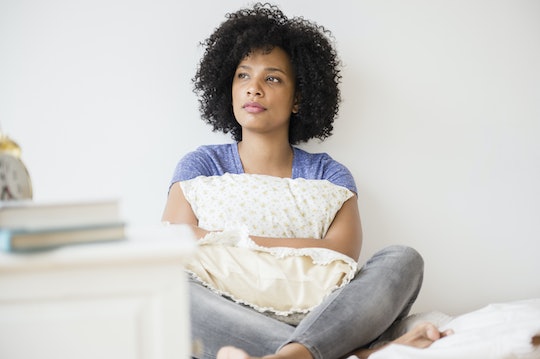 Chances are, you've spent your pregnancy feeling excited and thrilled about your baby's arrival. But in the days immediately after giving birth, you aren't on the emotional high you expected: in fact, you're pretty spent and may be experieince the maternity blues. But what are the maternity blues, and how do they affect new moms? Feeling low right after you give birth is not unusual.

The maternity blues, AKA baby blues or postpartum blues, affect the vast majority of new moms. According to the American Pregnancy Association, around 70 to 80 percent of new moms deal with negative feelings or mood swings in the postpartum period. When you look at it this way, it would be more unusual to get through a pregnancy and delivery without feeling troubled.

These mixed feelings may catch you by surprise, especially if you're excited about motherhood. However, the maternity blues don't say anything about your ability or willingness to be a mom. Rather, these baby blues are brought on by a combination of changing hormonal levels, physical exhaustion, and emotional concerns about your baby's well-being, as explained in Baby Center. It does not reflect negatively on you in any way.

For most women, thankfully, the maternity blues are fleeting. According to WebMD, the baby blues tend to last for about two weeks. After that time, you'll probably be getting the hang of the whole motherhood thing.

There is one important distinction to remember: the difference between maternity blues and postpartum depression. Although the maternity blues may have you laid low for a few days, the symptoms are generally not too severe or long-lasting. Postpartum depression, on the other hand, is characterized by symptoms such as severe mood swings, extreme anxiety, and constant crying, according to the Mayo Clinic. If you even suspect you're showing signs of postpartum depression, then don't hesitate to seek help from your physician at once. Whether you deal with the baby blues or more serious depression, you deserve to approach motherhood feeling your best.