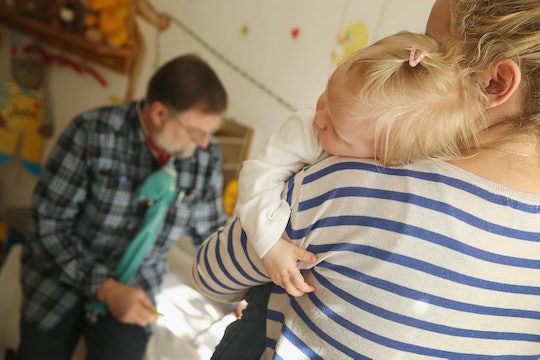 It's only the fourth month of the year, but the U.S. is already close to breaking a very scary record. According to experts, the nation is well on its way to surpassing the total number of reported measles of the last decade. That's right, in just four months time, the U.S. has had more reported cases of measles than it did in the previous ten years. But, how much do people actually know about the disease? Some people might even be wondering, what are the measles? Here's everything parents need to know about this deadly disease.

Let's start with the basics. Measles is a highly contagious and dangerous disease caused by a virus.

Just how dangerous? About 2.6 million unvaccinated people die from measles each year, according to The World Health Organization.

Right now, the United States is in the middle of an outbreak that refuses to slow down. A whopping 71 new cases were reported last week, bringing the grand total of measles cases to 626 in 22 different states, according to The Center for Disease Control. Iowa and Tennessee are the two latest states to be affected.

To put it in perspective, measles outbreaks are up 300 percent from last year, according to The Guardian.

The onset of measles usually starts with a fever, then progresses with a dry cough and runny nose. Other symptoms include red eyes and the tell tale red dot rash that starts from the head and works its way down the body, according to the Centers for Disease Control.

There's no specific treatment for measles so the best protection is prevention. On it's own, barring there are no complications, the disease runs a course of 7 to 10 days, according to Kids Health.

Complications include brain swelling, dehydration, pnuemonia, or even blindness, according to the World Health Organization.

Measles are easily preventable through vaccine, but, unfortunately, that doesn't mean everyone is getting them.

The measles vaccine is typically administered in combination as the Measles Mumps Rubella (otherwise known as MMR) vaccine that is given to children once at 12 to 15 months of age, and again as a booster between 4 and 6 years of age, according to the Mayo Clinic.

It's recommended that all children and adults are vaccinated with both doses, according to the CDC. If an adult only received one shot as a child, it's not too late to get the booster later in life.

Those of you considering receiving a booster shot should consult your doctor(s) immediately.

Pregnant women cannot take the vaccine and therefore should get vaccinated before planning a family, according to Medical News Today.

Even if you are vaccinated, there are health precautions that everyone should take to avoid getting the measles. And, while some of these may seem like common sense, most people forget. Here is what the CDC recommends:

Unfortunately, it doesn't seem like the spread of measles is slowing down. In fact, they are rising, which jeopardizes the health of children and adults everywhere. Vaccines are an important part in preventing this debilitating and contagious disease.

As always, your family's physician is the best source formation for all of your medical questions. Until then, happy hand washing.

More Like This
What Is RSV?
New Report Shows 80% Of Pregnancy-Related Deaths Are Preventable
What Parents Need To Know After DEA Issues Warning About "Rainbow Fentanyl"
Are Babies Lonely In The NICU? Here’s What Experts Say