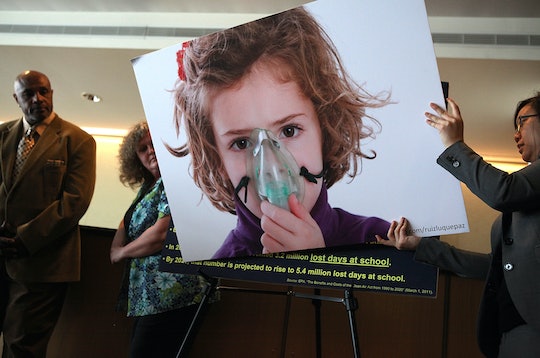 Here Are The Most Common Respiratory Diseases In Kids

According to the Centers for Disease Control and Prevention, back in 2014, 161 children under the age of 15 died from asthma-related problems in the United States. Worldwide, an estimated 44 percent of asthma cases among children are thought to be related to environmental exposure causes, according to reports from the World Health Organization released Monday. So what are the most common respiratory diseases in kids, and is asthma the number one disease of this type for that age group?

According to CNN, every year, "environmental pollutants cost an estimated 1.7 million lives among children under 5," based on reports from WHO. One of those reports states that infants exposed to indoor or outdoor air pollution — which includes secondhand smoke — have an increased risk of pneumonia in childhood, as well as an increased risk of chronic respiratory diseases, like asthma, for the remainder of their lives. So asthma is a concern the world over. According to the American Academy of Allergy, Asthma & Immunology, approximately 250,000 people die prematurely every year from asthma internationally, and almost all those deaths are avoidable.

But what are some other top respiratory illnesses and diseases, and which of them strongly impact children?

In October of 2014, UnityPoint Health of Des Moines listed the top eight respiratory illnesses and diseases as follows:

The National Heart, Lung, and Blood Institute reported that when it comes to that number one ailment, in the U.S., more than 25 million people are known to have asthma, and of those, about seven million are children with asthma.

Pneumonia is another common childhood illness. In fact, Healthline.com reported that pneumonia affects 150 to 156 million children under the age of 5 each year. And while modern treatments have caused the sickness to be less of a concern for children in the United States, in developing countries, pneumonia remains a big threat to kids.

WebMD reported that babies and toddlers can have eight to 10 colds a year by the time they turn 2 years old. Children who are preschool aged have about nine colds a year, and kindergartners can have 12 each year. Adolescents and adults, according to that site, get about two to four colds a year.

The CDC reported that each year in the U.S., there are millions of cases of the common cold. Millions. The center also reported that colds are the main reason that kids miss school and adults miss work.

As it is the most common respiratory infection, many parents might look for ways to help their kids avoid catching a cold — and ways to prevent getting a cold or the flu themselves that they could pass on. Health lists several ways to avoid colds and flu, including washing hands as often as possible, regularly getting plenty of sleep, maintaining a healthy diet, and steering clear of those with cold symptoms.

More Like This
Banana Boat Sunscreen Has Recalled Products That Were Found To Contain Benzene
New York Can End Religious Exemptions to Vaccine Mandates, Says A Federal Appeals Court
How To Avoid & Treat Lyme Disease
Everything Meghan Markle & Lilibet Have In Common