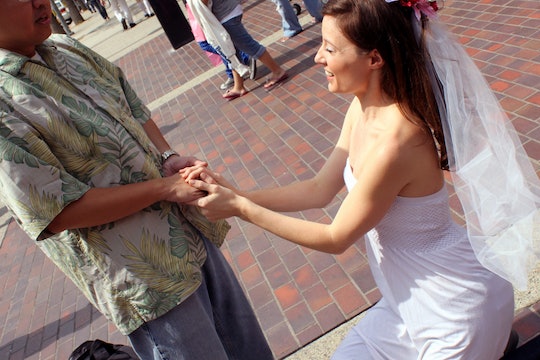 What Are The Origins Of Sadie Hawkins Day? It's A Bit Sexist & Outdated

Even if you're not exactly sure where it all started, most people are familiar with the Sadie Hawkins concept — on this one occasion it becomes "acceptable" for women to ask a man to an event or on a date. And as you can probably guess, the origins of Sadie Hawkins are predictably misogynist.

The story goes like this and was first told in a 1937 "Lil Abner" comic strip by Al Capp. In the fictional town of Dogpatch, there's the "homliest girl in all them hills," according to The Atlantic. She was so hideous looking, in fact, none of the local men wanted to marry the girl named, you guessed it, Sadie Hawkins. Her dad, Hekzebiah, was so worried about his daughter becoming a "spinster" that he declared it "Sadie Hawkins Day" in Dogpatch, and he rounded up every eligible man. The one that Sadie "caught" had to marry her. The idea caught on, and now it's become a tradition for generations of high school and even college kids — the Sadie Hawkins dance where the girls are supposed to ask the boys.

Sadie Hawkins is also a Leap Day tradition, with all sorts of dances and celebrations going on from St. Paul, Minnesota, to New Orleans. It's often honored as a Folk holiday where a man simply cannot refuse a woman's proposal.

But, tradition aside, there's just so much about Sadie Hawkins that demeans women. First, the idea that any other time a woman might ask out a man is somehow inappropriate is ridiculous. I'm sure most men appreciate not having to shoulder all the pressure to start a conversation or make the first move.

But Dr. Ruth Westheimer doesn't seem to see anything wrong with it at all. Only once in 4 years ladies! Hurry up and get yo man!

Second, the idea that an unmarried woman in her 30s is somehow undesirable or unappealing is insulting. A woman's value doesn't come from how much men desire her nor is her value to her father wrapped up in how many men want to hook up with her.

Finally — and perhaps most galling — is this caricature of unmarried women as these desperate sad sacks. It's the opposite way we should teach our daughters to interact with the men in their lives. I know, Sadie Hawkins is just a silly tradition and I probably should just get over it all, but there's something that feels wrong about dismissing toxic stuff like this and continuing to carry on the tradition every year with young women. There's something that feels awful about telling them they are anything but valued and empowered to do whatever they choose with their lives.

Mostly, I guess it just seems like a silly, old-timey notion that has no connection to powerful, beautiful young women today who have far more interesting things to do with their time than chase after a bunch of dudes in pursuit of a husband. And, I, for one, don't look back on a time when this "Lil Abner" nonsense was relevant.

Can't we just phase out "Sadie Hawkins" day and focus on the Leap Day aspect instead? Surely women have better stuff to do with a whole bonus day every four years.