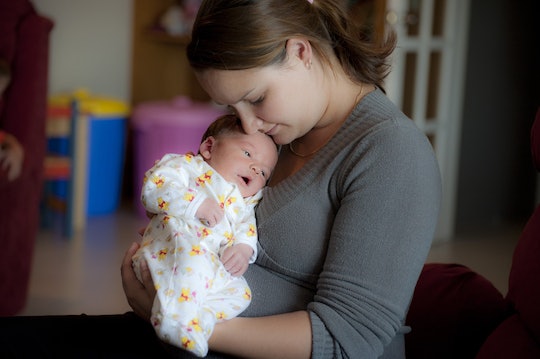 What Moms Should Know About The Puerperal Blues

There are a number of emotions that come with having a baby. You can feel overjoyed, overwhelmed, thrilled, scared, and maybe even a little sad. Today's moms have access to so much more information than in the past. They have their guards up for signs of mood disorders such as postpartum depression (PPD), postpartum anxiety (PPA), and postpartum OCD. But, what they may not realize is that the severity of perinatal mood disorders can vary. If you have less severe symptoms, for example, it can be what is known as puerperal blues. Which then leads to you ask yourself, "what are the puerperal blues?"

The word "puerperal" means of, relating to, occurring during or immediately following childbirth. Puerperal blues is simply another term for the "baby blues." According to the Illinois Department of Public Health, puerperal blues is a mild, brief bout of depression that affects around 50 percent of new moms. The American Pregnancy Association (APA) believes the number can be much higher, estimating that up to 80 percent of new mothers experience symptoms of puerperal blues beginning four or five days after delivery. These symptoms may include crying for no reason, impatience, irritability, restlessness, anxiety, fatigue, mood changes, and insomnia. The good news is that puerperal blues usually disappears about two weeks after childbirth, according to the APA.

What To Expect noted that a drop in estrogen and progesterone after childbirth, along with the stress of delivery, and the exhaustion of being home with a new baby can trigger puerperal blues. Doctors may not treat postpartum mood disorders with medication until after the first two weeks. At this point, it surpasses baby blues and may be diagnosed as PPD or PPA.

If you think you may have puerperal blues, the American Academy Of Pediatrics recommended getting as much sleep as possible and asking for help from your partner, family, and friends. Additionally, you should avoid spending too much time alone, consider joining a support group for new moms, and get plenty of exercise once your doctor gives you the "all clear."

If your symptoms don't lessen after two weeks, or seem to get worse, contact your doctor right away.